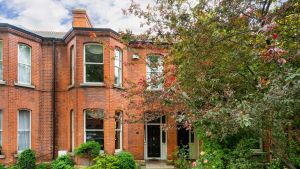 Since 2017 some of the biggest price increases in the Dublin property market have been on South Circular Road, where prices have risen by a third since the crash.

Though topped by demand in Portobello due to the location’s cachet and proximity to the city, Kilmainham too has witnessed a good recovery, with prices now on a par with selling prices during the property boom.

Number 549 is located along the leafy stretch just beyond the junction of the controversial site of the national children’s hospital, and is popular due to its Luas and bus transport links to the city centre.

While the property was in good condition it has undergone a recent facelift, and an extension to the rear in the form of a large kitchen now gives the property 155sq m (1,668sq ft) of floor space.

At hall level it has the usual layout of a late Victorian/early Edwardian home; with two interconnecting reception rooms, both of which retain their original features such as fireplaces and pine floorboards.

The extension now allows for an informal dining area plus a large kitchen which was designed by the current owner.

One of the selling points of this property is that it still retains a decent sized rear garden, complete with two fruit-bearing fig trees. Currently decked out with low maintenance paving, the fact that there is pedestrian access through a rear lane would allow new owners to develop the garden further without having to traipse through the house.

The property has three double bedrooms; one on the return which is very spacious, in addition to the principal and an adjacent bedroom. The large family bathroom is very large as it would have been a fourth bedroom in its day.

The main bedroom features a bay window, echoing the bay in the drawing room downstairs, and the mature trees along the road will help to block out the traffic sounds from this busy road.

Number 549, which is in turnkey condition, is on the market through Owen Reilly seeking €700,000.