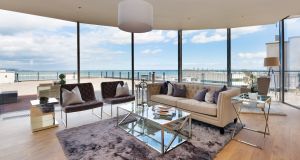 No 19 in the Pavilion Apartments, Dún Laoghaire 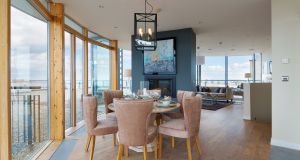 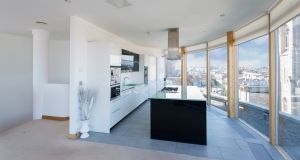 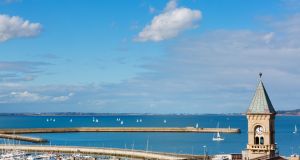 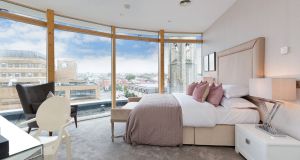 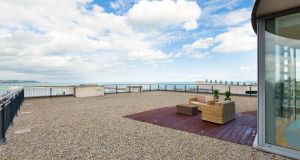 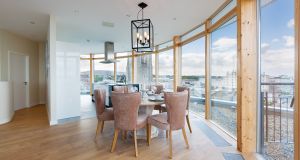 Back in 2001, Scott Tallon Walker designed the Pavilion Apartments in Dún Laoghaire. Phase one was completed in 2001 and block two followed in 2003.

Sitting at the very top of Pavilion II, No 19 is the ultimate show-off pad. It is built in the round, so is all curving spaces and floor to ceiling glass. Bought as an investment, it was then rented out. Now it’s been done up to sell, and so the furnishings are adding to the feeling of being in the lair of Christian Grey.

All this lavish luxury is for sale with Savills for €1.15 million.

On the entrance floor is a huge hallway/lounge with three of the four bedrooms off it. As you’re going to be spending most of your waking hours upstairs (more of which later), you might think of taking a bite out of this to make the third bedroom a little larger. Or keep as is and use as a study.

The curved walls also pose a challenge over how to place a bed in bedroom two, but then of course in a pad like this the solution is obvious: make it a round bed. The bathroom here is also an exhibitionist’s paradise, though more modest visitors could just put the blinds down.

Upstairs, the views are even more glorious: across Dún Laoghaire to the mountains, and all the way round from Howth to Bray Head by sea. There is an enormous kitchen/dining/living area, with a sexy gas fire, and even sexier glass topped kitchen island for chopping up impressive snacks.

Outside is a whopper of a roof terrace, and the bedroom on this level is 100 per cent wow: epic views, and an en suite to conjure with.

No 19 has the generous ceiling heights and storage spaces of pre-Celtic Tiger apartments.Its design has that sleek chic sheen that is a reminder of more innocent times, when spending money was fun and consequences were undreamed of – imagine.