See the world go by from Skerries harbour boathouse for €425k 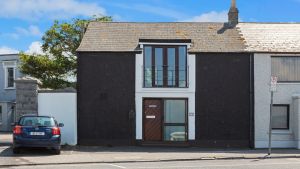 Seaside searches on property website myhome.ie soared during lockdown months. Searches for coastal homes within Dublin rocketed, including Malahide (100 per cent increase), Howth (120 per cent increase) while Dalkey had a 205 per cent increase – though that may well included the Matt Damon effect. All show a fresh desire to live by the sea.

The village of Skerries, on the Drogheda commuter train line, is one of the capital’s best-kept commuter secrets. It has been attracting visitors, what we used to call tourists, since 1825 and has a lovely working harbour with the road leading to it lined with eateries, bars and ice-cream shops. It has two beaches while the tree-lined main street of the town is just a block from the sea.

Homes in the seaside resort command a premium but The Boathouse, number 17a Harbour Road, might just provide an affordable way to buy into the best of Skerries’ offerings. This modest property is asking €425,000 through agent Felicity Fox, on a street where larger homes command far larger price tags for the same sea views. Number 9, a five-bed period property of more than 185sq m (1,991sq ft), for example, sold for €975,000 last August, having come to the market asking €1.25 million.

Originally a stable to the period house next door, The Boathouse exudes charm but is going to need work to make it habitable all year round. It has no heating, apart from a stove in the living area, and bare breeze-block internal walls, which all go to explain the property’s chilly G Ber rating.

The property has been in the current owner’s family since the 1940s when it was used to store their Mermaid boats. Converted into a home in the 1970s it remains true to that era. The bedrooms downstairs have low ceiling heights, less than modern standards of 2.4m (7.87ft) and are supported by visible steel joists. Two are doubles and one is a large single.

A spiral staircase, also very 1970s, leads upstairs to the open-plan living room/kitchen, the latter concealed behind a counter with just a plug-in hotplate for cooking. The walls have exposed cut stone and the pitched roof has timber shiplap beams. A wood-burning stove warms the room, which is triple aspect, and it is the views from here that will really attract buyers.

To the front is a small balcony where you can survey all the harbour action and, on a clear day, see all the way to Balbriggan. The waves lap against the slipway across the road and Skerries Sailing Club is less than 100m away. It’s postcard picture perfect and an area that’s popular with day-tripper and walkers, while Stoop Your Head, the landmark pub and restaurant, is just two doors down and a lively spot.

On the other side of the room a set of french windows open out to a large terrace where you can see the Irish Sea and slivers of south beach through the mature trees. The steps lead down to a gorgeous garden bounded by ancient granite walls. The lawned space is private and home to a palm tree and Veronica shrubs. Southeast facing, it will get both morning and evening sun.

The property, which measures about 90sq m, needs a serious upgrade but can offer a quality of life no city centre property within the same price bracket can.

The downside is that the train service is only a commuter one so connectivity to the city is more limited. But with many of us adjusting to working from home on a longer-term basis number 17a offers a fresh-air alternative with plenty of sea views.

Should we stay or should we go? Readers on holidaying abroad this year
8