Sandford Terrace, where Mary Robinson lived, is hidden away but close to the city 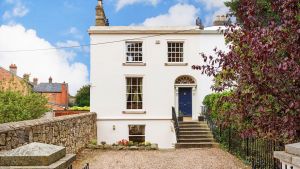 “Our son had it timed to a T,” says the owner of 51 Sandford Terrace, an elegant end-of-terrace in the heart of Ranelagh. “He would set his alarm for 8am, get up, have his breakfast, and still be at school in Gonzaga for 8.30am.” It was the location that attracted the family to the house, although it was a very different proposition when they bought it almost 20 years ago.

“We didn’t move in for 18 months, there was so much work to do,” the owner recalls. The family had actually thought the house was listed. “We found out it wasn’t, but restored it as if it was anyway,” she says. They enlisted the help of architect Paul Brazil, and you can see one of his signature round windows in one of the bathrooms. The results of his labours are a cosy, elegant refurbished house, in walk-in condition, with many original features preserved.

A buyer could easily just move in and and immediately settle down to enjoy the country-style kitchen, breakfastroom and family room at garden level, the pair of elegant reception rooms on the first floor, and the four generous bedrooms on the return and upper level.

“We wanted an old house with a contemporary feel,” the owner says, and they’ve certainly achieved that. The house is now for sale with Hunters for €2.95 million.

Sandford Terrace is a special spot. Former president Mary Robinson lived here, as did gardener Helen Dillon. Dillon’s house, number 45, sold in June of last year for €4.5 million. The year before that, number 47 sold for €4.35 million, which might make you think that number 51 is a bit of a bargain, if you’re wont to bargain in the millions.

It’s smaller than its neighbours – 291sq m (3,134sq ft), compared to 397sq m (4,273sq ft) at number 45. The garden is smaller too, though at 120ft it’s still pretty substantial. A favourite with the owners’ sons for football practice with their friends, the garden has a long lawn, patio area and parking via side access.

“The double electric gates are great for getting anything in,” says the owner, “from skips, to deliveries to bouncy castles.” There is also gravel parking to the front, and Sandford Terrace itself is set back from the main drag of Sandford Road, screened by a little wooded area.

The owner’s favourite room is the kitchen, which has an Aga, Belfast sink, granite worktops and a walk-in pantry. There’s a sandstone-tiled floor, so it has that cosy country feel. As it also opens up to a bright breakfastroom with French windows to the patio and garden, it’s a lovely, light space too.

“On a quiet Sunday you feel like you’re in the countryside,” she says. Double doors open at the other end to the family room, so the family can hang out together while meals are being prepared, newspapers read, and favourite TV shows watched.

Number 51 has also been a successful house from which to work. A study on the first return has dual-aspect windows and a little balcony with steps down to the garden. Tear yourself away from work in time for sundowners, perhaps. Above this, the guest bedroom also has gorgeous wraparound windows, and is a lovely nest for naps as well as a good night’s sleep.

“It’s private, hidden away, and yet you’re still so close to Ranelagh, schools and the city centre,” the owner says. The family are tearing themselves away now that their children are older, and so number 51 Sandford Terrace is a secret no longer.

Conor Pope’s staycation diary: ‘It’s like I’m staring at a Polaroid of my childhood holidays’
10