Sandycove home with handmade mahogany kitchen is ideal for entertaining 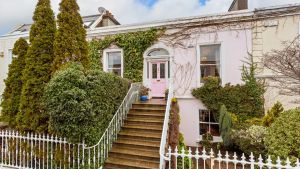 Sixteen years ago, when Sarah Lappin and her husband, John, were returning from a holiday in France, a friend handed them a copy of the Irish Times property supplement, remarking, “Isn’t that the kind of place you are after?” of the house on its front page.

A week later the couple purchased 46 Sandycove Road, in the south Dublin seaside suburb, at auction. When they engaged a quantity surveyor, however, his comment was: “You know you have really just bought a front door.”

Sarah says: “Half of the house did not have electricity, but it ticked quite a few boxes. I just love villa-style houses, and, while we had to do an awful lot of work, the bones of the house were all there.”

The couple changed the layout from what is was – with two bedrooms on each level – to what it is now where all the living space is located upstairs and the bedrooms are at garden level.

This is a very practical solution, as the kitchen now flows into the dining room and, thanks to the property being double fronted, there are two interconnecting drawing rooms at the other side of the hallway, allowing all entertaining to be confined to one floor.

One of the most remarkable rooms in the property is the main bedroom, which is as close as a private home gets to a five-star-hotel suite. The owners removed a dividing wall and reconfigured the room in three sections running the entire length of the house, with no doors so it all flows together seamlessly.

The central area is home to a superb bathroom with a large Water Monopoly Paris bath. The sleeping area, with a contemporary four poster bed, overlooks the front garden, while the small living area beyond the bathroom now opens out to the rear garden.

The kitchen, which Sarah designed herself, was handmade by Higginbotham of Dublin: “I really wanted something that resembled custom pieces of furniture rather than an off-the-shelf kitchen, so we went for mahogany units with an art deco theme.” All the brassware was imported from the US, and special features such as pull-out chopping boards sitting flush under countertops show the level of thought that went into the design.

The property is laden with colour and textures, from the Ralph Lauren metallic wallpaper in the reception rooms – which helps to reflect the light – to the yellow ochre walls in the library.

While the house has three bedrooms, new owners have the option to turn the library into a bedroom or indeed reinstate the wall in the principal bedroom at garden level to give an additional fourth bedroom. But the principal suite is probably one of the key selling points of the property, due to its size, aspect and the fact that it opens out to the garden.

The rear garden is laid with paving and raised herbaceous borders and also has rear access to Rock Yard Lane. There’s a shed out here too where the couple keep a fridge and freezer that they use as a secondary kitchen when entertaining during summer months.

The location is within a five-minute walk of the popular Forty Foot bathing spot. It was named “one of the top 10 places to swim in the world” by the New York Times in 2016, and is just around the corner from the charming village of Glasthule.

The couple are placing their 190sq m (2,045sq ft) home on the market through Sherry FitzGerald seeking €1.385 million, as they are moving to be closer to family in Howth.