Restored Georgian five-bed with rooftop garden by canal in Dublin 4 for €2.45m

Originally in three flats, the house has been refurbished and extended 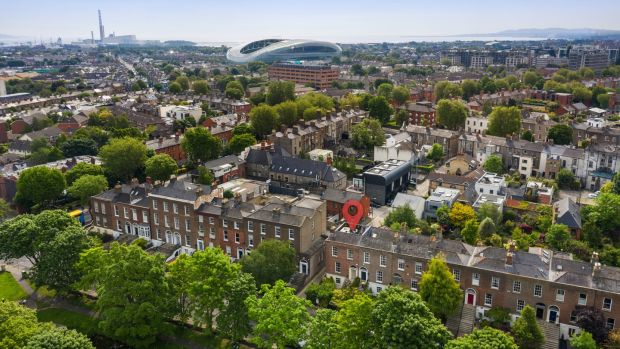 A rooftop garden in a period property – never mind a canal-side Georgian townhouse – is a rare find in Dublin. Maybe the engineering of it and the attendant costs put homeowners off, or it could be the thought of dealing with the planners when the building is a protected structure.

None of that deterred the owner of 19 Percy Place when he bought the two-storey over basement house about 15 years ago, when it was in three flats. It needed complete refurbishment to return it to a single-family home, from digging out the basement and raising the ceiling height to putting on a new Blue Bangor slate roof.

What looks like a large rectangular skylight – imported from a specialist company in the UK – at the top of a flight of stairs off the landing slides across to give access to a roof garden. It easily holds 12 for a party, the owner says of the garden, which is cleverly fitted into the valley of the double roof so as not to disturb the roofline in any way. It is plumbed for a hot tub, though the owner didn’t bother with one, preferring a barbecue and comfortable seats to enjoy the city views.

The renovation included an extension to the rear at garden level: the last time the house had been extended was in the Victorian era when a return was added to make space for a bathroom.

Now with 267sq m (2,875sq ft) there are two fine interconnecting reception rooms at hall level with a long list of period features – all restored in work that included removing the original slate fireplaces and having them expertly cleaned and polished. Upstairs there are three bedrooms: two en suite, two doubles and a large single. The high-spec, marble-finished family bathroom is in the first-floor return while in the hall return is a room listed as a bedroom but in reality will probably be used by new owners as a home office or study.

There is another bedroom down at basement level – it’s to the front, a spacious en suite double that’s ideal for an older family member who wants a little distance and can come and go using the door under the granite entrance steps. All the en suites are marble-clad with high-end fittings and where there is marble tile flooring, as there is in the entire basement area, there is underfloor heating.

While care was taken on the upper floors to keep the period feel, in the basement every original feature had gone by the time the owner bought it, so he adopted a more modern approach. The extended living area is fitted with an Alno kitchen, and there’s space for a large seating area and a dining table. The rear wall is mostly glazed and doors open out to an attractive landscaped town garden with a side vehicular entrance and off-street parking.

Being so close to Mount Street Bridge, the site of a significant battle during the 1916 Rising, it’s not surprising the house features in the documents held in the National Archives when its owner John Begley put in an insurance claims for extensive damage done during the fighting, including broken windows. His claim for £30 compensation to fix it all was granted.

Trees in the front garden and along the pretty road made photographing the front facade difficult – though the drone shot at least shows the roof garden.

Number 19 Percy Place is for sale through DNG, asking €2.45 million.