Renovation flip in Sandymount on sale for €850,000

Property was previously sold in 2010 for €465,000 but has been totally refurbished 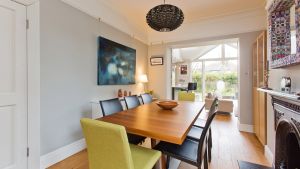 The last time 77 Sandymount Road came on the market was 2010 and the Dublin property market was very different, as was the condition of the end-of-terrace house close to Sandymount village.

Then it was a doer-upper and it sold for €465,000. The buyer quickly set to work gutting the three-bedroom house – it needed everything – and adding an imaginative and stylistically sympathetic two-storey extension to the rear. Now, with 118sqm (1,275sqft), it is back on the market, through Sherry FitzGerald for €850,000. It is ready to walk into, freshly decorated and new owners will have nothing to do.

The extension changed the interior layout of the ground floor – the original reception rooms interconnect via folding doors and the back room opens directly into the new part so the whole space can be open plan.

Often that results in the back reception room being dark but, as this is an end-of-terrace, a long window was installed in the side so it’s a bright room. Original features were kept: several rooms still have their cast-iron fireplaces, floorboards have been stripped and polished and, in a rarely seen interior design touch, the picture rail in the front living room is used to hang pictures.

The oak-floored extension which runs the width of the house was fitted with a smart grey contemporary Lomi kitchen and a breakfast bar separates the cooking area from a comfortable seating area in front of a gas stove. The wall behind that has been papered with a striking abstract design. Off the kitchen is a utility room which opens out to the side passage.

Upstairs the extension made space for a large en suite shower room and an extended main bedroom, and there is a further double bedroom and a small single currently used as a home office. The family bathroom is small but well-planned and beautifully finished.

There is a side pedestrian passage and a good-sized south-west-facing garden. The owner is clearly keen on security as CAT6 Ethernet cabling was installed with CCTV cameras around the exterior of the property.

Parking is on-street and this stretch of Sandymount Road tends to be busy as it is very close to the village and just opposite the supermarket.

Fast Donnybrook flip with all the work done for €625k
5