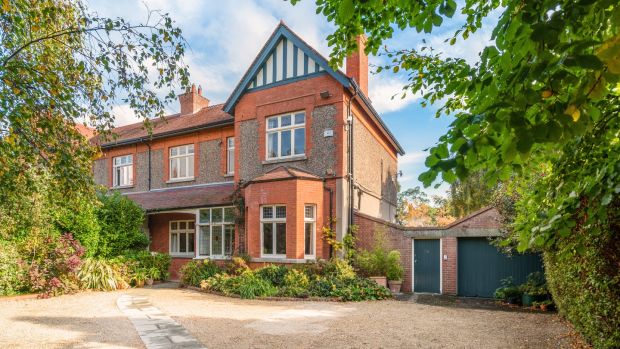 By 1907 when number 28 Zion Road was built, its Edwardian-era builder knew the time for two-storey over basement houses had passed. The new generation of middle-class professionals wanted more modern, easier-to-manage homes, with more bedrooms than were found in older, sometimes larger-looking houses. They also liked a garage for their newly purchased car and good gardens.

He built number 28 and six of its neighbours with all the fashionable architectural details of the age starting with the timber veranda to the front, stained glass in leaded windows and cast-iron fireplaces with art nouveau-influenced tiles. The wife of the first owner gave the house its Miss Marple-ish name, Norham Mains, after the village in England where she was from – and there must have been a row at the time because the owners got special permission to build a redbrick wall to prevent the cows wandering in from the Bewley farm at the back of the house, now the location of the High School.

The present owners moved into their five-bedroom. 309sq m (3,326sq ft) semi in 1998 – these houses come on the market very rarely, the last one being 17 years ago. In the intervening period they added an impressive Norman Pratt conservatory at the rear and partially opened up the kitchen area which is fitted with stone-topped, timber, painted units and a large island. Other work included modernising the bathrooms and generally keeping on top of the decor so that it matches the elegance of the rooms.

The bedrooms are doubles, spread over two floors, and downstairs there is a dining room, living room and family room. New owners might consider knocking the breakfast room through to the kitchen to create a large family space with access to the garden. There’s also a sizeable utility room.

Set on more than a third of an acre, the gardens are private, maturely planted and well kept. To the front – past the granite pillars – there is parking for several cars and the house is set well back from the road and is well shielded by greenery. There is a detached garage to the side which new owners might eye up for conversion, subject to planning and dependent on their needs.

The owners are now downsizing and Norham Mains at 28 Zion Road is on the market through Sherry FitzGerald seeking €2.65 million.