One year and one refurb later, Blackrock home doubles in price

Three-bed Edwardian in walk-in condition, with views across Dublin Bay, on sale for €795,000 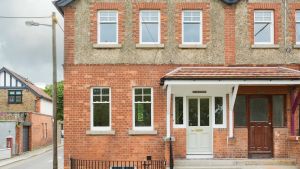 St Catherines, 17 Seafort Parade, in Blackrock, is a house in walk-in condition. But that wasn’t the case last October when the end-of-terrace three-bed was purchased for €406,0000 by Fitzpatrick & Heavey Construction. The Edwardian came on the market in November 2016 seeking €450,000 in need of complete modernisation.

Overlooking Blackrock Park with views across the bay to the Pigeon House and beyond, the setting is scenic, although at this time of the year the gorgeous maritime views are somewhat obscured by the park’s deciduous trees.

Measuring 120sq m /1291sq ft, the redbrick fronted home is arranged over three floors with a separate garden-level entrance to the front. It has been extensively refurbished with particular attention paid to damp-proofing the ground level, insulating all the walls and repairing the roof to ensure the re-use of the original terracotta tiles.

The front door, at hall level, is accessed via a set of granite steps. Underfoot the original timber boards have been polished, and decorative timber panelling added to the hall and stairwell.

The layout has been changed with the kitchen and living rooms moved to different levels and the first of the three bedrooms is where the formal sitting room would have been.

This room has gorgeous sea views and a lovely period fireplace. From here you can watch the progress of the Dart as it travels between Blackrock and Booterstown and indeed there is a pedestrian short cut through the park from the station in Blackrock.

The living room is now set to the rear of the house in a bigger space that can better accommodate several sofas around its inset fire.

The kitchen is down a flight of stairs. It has a painted kitchen with marble countertops and access to a small but private west-facing yard from where there is stepped pedestrian side access to the street. Its internal door has been removed to make the space feel more open and while it looks good it may be missed in winter. The family room is to the front with a lower ceiling and there also is a utility set under the granite steps with a shower room.

There are two bedrooms on the first floor. Both have built-in wardrobes. The main bedroom is set to the rear and the smart bathroom features decorative floor tiles with the same tiles echoed in a niche above the bath.

The finish throughout is first class, overseen by Mark Charles, a project manager who has previously worked on high-end homes including Michael O’Leary’s Gigginstown House in Westmeath. In fact, so impressed was the next door neighbour with the refurb job here that she hired the same firm to renovate her house incorporating many of the same details.

Elon Musk: Grimes and I have this debate of ‘Are you more crazy than me?’
4

The importance of relationships and belonging
5