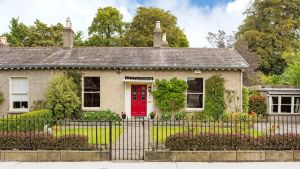 Waltham Terrace, a highly sought after address in Blackrock, was constructed in 1836. The introduction of the Dublin to Dún Laoghaire railway in 1834 allowed residents in Blackrock to commute to the city for work – which, it is suggested, is one of the reasons the properties here did not have coach houses.

Number 13, a double-fronted three bed which extends to 131sq m (1,410sq ft), is home to David McCabe, an accountant who, after retiring from Bank of Ireland at 56, went on to sit on the boards of 78 companies and 12 charities over the past 20 years.

Now David and his trusty golden retriever, Holly, are downsizing to be closer to his daughter.

Walking through the house, it is evident that 13 Waltham Terrace was a very happy home for the McCabe family for the past 46 years.

David credits Joan, his late wife of 53 years, with so much around the house; she was the green-fingered enthusiast who tended the rear garden, which is laid out with two areas to take advantage of the path of the sun.

“We used to sit here [at a small paved area] in the mornings to have coffee, and later in the evenings we would have dinner at the gazebo to catch the setting sun.”

An artist with a fondness for embroidery, Joan’s work hangs throughout the house; from a large maritime work in the hallway which she made when the couple first met, to the hand-stitched bedspreads in each of the bedrooms.

Alongside the property is a studio apartment which can be accessed through a separate entrance, in addition to a couple of sheds, which new owners may want to amalgamate into a new extension to increase the overall size of the property – subject to planning.

In its current layout the house has two reception rooms at either side of the hallway, with two bedrooms and a family bathroom on the return.

At garden level a living room opens into the kitchen, and a particularly nice bedroom opens out into the garden.

In one of the bedrooms – which David uses as a study – a large framed family tree hangs on the wall. It traces his ancestry back to a Scottish member of parliament and also his Keenan family who had a wrought iron business on Fishamble Street in Dublin.

Known as Keenan Engineering Iron Works – until it collapsed in the economic war of 1933 – the company provided all the gates that now stand at College Green and the Phoenix Park. Its factory was formerly the great music hall, where Handel staged the first performance of his great oratorio The Messiah.

As chairman of the local residents association for 30 years, David also kept chickens across the road at a larger house, where he and the neighbours would share the eggs. Now that it is time to move, he would like to see a new family enjoy this house. It’s for sale through Lisney seeking €1.395 million.