Quirkiness of 150sq m property will have instant appeal for some, but scope to start afresh too 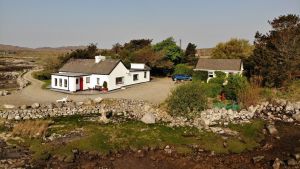 For some, Connemara just gets under one’s skin – and in a good way. The late Mary Killeen, though born and raised in Dublin, made Connemara her home for more than 30 years. “There is a lot of her still here,” recalls daughter Oonagh, of her home Curlew Cottage just 1.5 miles from the village of Roundstone.

The Killeen family have been coming to the pretty west of Ireland village for the past 31 years. “As soon as school finished we all piled into the car with the dog and headed west. Every holiday was spent at the cottage. Dad, who passed away in 1986, would come down at weekends and for the whole month of August.”

It wasn’t just for holidays that the Killeens used the property. In addition to family christenings and gatherings, Oonagh and her sister Elmagh both held their wedding receptions on the grounds of the detached property, which stands on 1.28 acres, with water frontage.

Today two of Mary’s children own houses locally, with Michael recently moving lock, stock and barrel from Dublin to the village, and establishing his company office at Michael Killeen Park, which is named for his late father and namesake.

“Mum created her own slice of heaven here,” recalls Oonagh “She built an art studio, ponds and landscaped the garden to what they are now. She always talked of a swimming pool, and 15 years ago she had a local man move a few boulders, which has created a tidal pool, which is why she never went to the beach – unless she was heading over to one of the islands.”

Mary began painting when she moved to the village full time in 1986.

“She took classes with Kenneth Webb, and was a great friend of the late Cecil Maguire. Sometimes she would head off for days with a group of painters known as the Backstreet Artists when they came down from Dublin, and so many wedding presents that we gave to people over the years were of her work,” says Oonagh.

There is a small art studio attached to the garage where Mary would paint. She hung the sign “Gone to the Beach” on the front door of the house, “but really she was in her studio doing what she loved”.

Oonagh says the four-bed house is in need of some work as it needs damp proofing. As she puts it: “Some people will just love it as it is for its quirkiness, but someone else may want to start afresh. For swimming, though, it’s really very safe.”

The fantastic site on the edge of one of Connemara’s most popular villages and itslocation at the water’s edge is most certainly what new owners in search of a seaside escape will fall for. The 150sq m (1,615sq ft) property is now on the market through DNG seeking €600,000.