Large five-bedroom family home, rebuilt in 2003, fits in well with its older neighbours 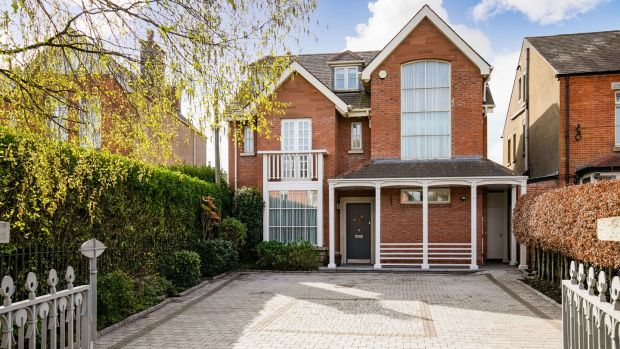 Relative to its neighbours along the road, No 31 Bushy Park Road in Rathgar is a new build. The owners bought a tiny gate lodge belonging to the Meadowbank farm that was once at the rear of the road in 1989, rebuilding it as a family home before levelling it in 2003 to start again, this time with architect Ken Edmondson designing a much larger, 287sq m (3,089sq ft) house, which was completed in 2005.

The idea was that the double-fronted house should blend in with its redbrick neighbours – and it does, while being distinctly different with its large windows and gables and accommodation over three floors.

To the front the timber-trimmed porch nods to the house’s Edwardian-era neighbours, and the timber front door with its glazed detail hints at what might be directly inside – a hall with panelling and timber detailing heavily influenced by the work of Scottish architect Charles Rennie Mackintosh. His ideas are referenced again in the staircase design and in the large family room where the ceiling is panelled and the fireplace inspired by the famous architect’s familiar arts and crafts grid pattern.

The owners bought what would go on to become a prime site because of the south-facing back garden, and the design of their house takes good advantage of that with a room across the rear that features a wall of windows and glazed doors and which houses the kitchen and dining room.

The kitchen is solid timber – Shaker-style topped with black granite – a look hugely popular when the house was built. Dividing this open-plan space are what the owner calls “flying buttresses” – striking aqua green painted, decorative, almost sculptural fin-shaped dividers at ceiling height. The good-sized family room opens via oversized sliding doors into this area at the rear of the house, and there is also a smaller living room to the front. Also on this level is a utility and guest toilet.

There are five bedrooms, all doubles, spread over the two upper floors off bright and airy landings. There are bathrooms on each floor and the main bedroom has an en suite.

At the end of the mature back garden is a self-contained timber studio – an ideal home office, although there is an office at the top of the house – or perhaps a hangout for older children. The BER is a C2.

To the front there is parking for six cars set behind electric gates.

The owners, who are downsizing, are selling 31 Bushy Park Road through agent Peter Wyse seeking €2.1million.