Oakmount plans include branching out to ‘vibrant, energetic’ area of Dublin 8 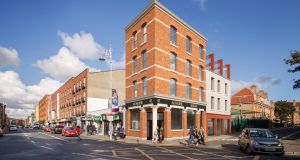 Oakmount, the property development company run by Paddy McKillen Jr and Matt Ryan, faces its busiest year yet, with a number of office, residential and hospitality developments set for completion and further plans in the pipeline.

Its developments to date have been concentrated in a select few desirable locations, including the Docklands, Dublin 2, Dublin 4, Dublin 6, Blackrock, and Mount Merrion, and it is now branching out to Dublin 8, an area it describes as a “vibrant, energetic and historic part of the city”.

At 26 New Row South, adjoining the popular Fumbally Square development, Oakmount has acquired a site comprising a protected former distillery building and adjoining office buildings. The site has existing planning permission for a mixed-use scheme, which includes the conversion of the stone-cut former distillery building into 2,506sq m of modern Grade A office space.

Few similar conversions been carried out in recent times, however, Airbnb moved to a warehouse redevelopment in the Docklands and Oakmount will no doubt be hoping to attract a tenant of similar quality to this scheme.

The adjacent non-protected buildings are to be demolished to make way for a new six-storey over-basement building, consisting of 24 large apartments built above a café, restaurant, deli and gym. The scheme, as currently permitted, includes four one-beds (56sq m each), 13 two-beds (80-85sq m each) and seven three-beds (103-113sq m each), all with balconies/terraces and basement storage. Construction is likely to begin soon, with completion due in late 2018, and the developer is expected to lodge an application for amended planning in the coming weeks to make facade improvements.

A short distance away on Francis Street, again in Dublin 8, Oakmount plans to begin construction this month on a new five-storey over-basement retail and office building. Last year the 0.14 acre site at 61-62 Thomas Street was acquired when it was offered for sale through agents Cushman & Wakefield. The two mid-terrace commercial buildings were sold with the benefit of full planning permission for demolition and replacement, which the developer will avail of when they go on site.

Back on traditional stomping ground, one of the developer’s biggest projects of this year will be at the Howl at the Moon premises in Dublin 2 which it purchased in January for a reported €3.2 million from the Mercantile group. The existing structure is three storeys high – unusually low-rise in comparison with the rest of its Lower Mount Street neighbours, which are practically all four-to-five storey over-basement structures.

It is expected that Oakmount will soon seek planning permission to replace the existing pub with a new hotel which will be more in line height-wise with its neighbours. The planned building will likely follow the format of the developer’s other hotels, including The Dean on Harcourt St and new hotels they have currently in the pipeline in Ranelagh village and on North Wall Quay. That format includes the provision of dining and bar areas at ground floor and penthouse level, with hotel rooms on the floors in between.

Also in Dublin 2, the group plans to open a pub and cocktail bar at the former Aungier House pub at 43 Aungier Street. Last year, Dublin City Council sought offers for the property through agents Lisney, with Oakmount’s bid in the region of €800,000 emerging successful. The plans include a €1 million refurbishment and extension of the derelict period structure to include a traditional-style pub at ground floor, with a kitchen and cocktail bars on the upper floors, in addition to a small roof terrace that can accommodate about 20 people.

Popular neighbouring occupiers that have joined this stretch in recent years include Network cafe, Dublin Pizza Company and Aungier Danger. The renovated Aungier House will provide a further boost to this relatively quiet stretch between the busy pubs of Camden Street and the northern end of Aungier Street. The project is still at planning stage, and it is expected that the proposed works will take six months to complete once permission is granted.

These latest development plans will, in addition to adding valuable properties to Oakmount’s growing portfolio, undoubtedly add to the number of venues operated by the Press Up Entertainment Group, run by Oakmount’s founders, which is now the country’s largest pub chain.