Love me Tenter: double the space in Dublin 8 for €650k 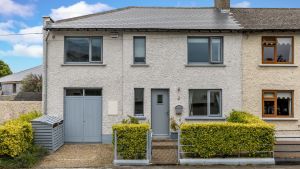 The renovation at 2 Gilbert Road is a fine example of a smart conversion and extension of an old house in the Tenters area of Dublin 8. It has almost doubled in size from 76sq m (818sq ft) to a generous 135sq m (1,453sq ft).

The property, which was purchased in 2011 for €285,000, is home to Pamela Fraher, a current affairs researcher with RTÉ, her husband Daniel Hanahoe and their two young children.

“When we bought it, it was a cold dark house with layers of wallpaper and mismatched carpets. It had a lean-to out the back and oddly enough the bathroom was located in one of the bedrooms,” says Fraher.

At the time she was pregnant with their first child, so the couple gave the house a superficial renovation, where they painted the entire house after stripping back years of wallpaper.

Then in 2015 they began from scratch to give the property a complete overhaul.

“We gutted it, so much so that all we were left with were four walls and no roof. At the time I was in the middle of planning our wedding so it was all go; I would cycle to meet the builders on site at 7 am, then head off to wedding places and finally get over to work.”

Architect Kevin Johnson of DN Smith and Associates was tasked with the redesign of the property which was done in conjunction with Fraher’s late uncle Joe Clavin: “While Joe worked as a builder he had trained as a draughtsman, so had a really good sense of what could be done” recalls Fraher.

“We had mulled over ideas for the four years we had lived here, and what we really wanted was a double fronted house. Joe persuaded us to incorporate a garage into the design – and how right he was – as with two small boys the amount of storage you need is incredible.”

The property now has three double en-suite bedrooms, with a further bathroom downstairs. What is incredible is the amount of natural light that floods into all the rooms, thanks to the large open plan space and huge sliding door that leads from the kitchen/dining area into the sunny garden.

This room has a particularly nice solid oak herringbone parquet floor laid by Mike Conneely, who had honed his craft in Massachusetts before establishing his Irish business.

The couple are moving to be closer to Fraher’s workplace at RTÉ.

“We really love the location, but with two small kids, Daniel’s office in town and my work at the other side of the city we are all going in different directions in the mornings.”

The property, in turnkey condition, is on the market through Owen Reilly seeking €650,000.

‘The quarantine 15’: Don’t be ashamed of those extra pounds
8