Live the Downton life off Merrion Square for €1.1m 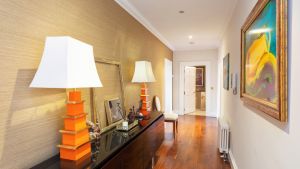 Despite Dublin having a large stock of substantial Victorian and Georgian houses there is not a corresponding large supply on the market of high-quality period apartments. Developers have long tended to cite the prohibitive costs of subdividing these grand properties as a significant – but not the only – stumbling block.

Some years ago a big development included part of a terrace of Georgian houses on the busy, wide street between the canal and Merrion Square at 18-21 Lower Mount Street being converted into apartments.

The facade with its grand entrance remained and as part of the development a new, modern block was built to the rear for additional units, a courtyard, communal garden and underground car parking.

While the apartments in the new block are lovely – airy modern spaces with large picture windows and are perhaps quieter than the ones to the front – it’s the apartments in the original building that tend to be the most sought after. Of course that’s when anything in the development actually comes on the market, which isn’t that often.

From the start the development attracted owner occupiers and when there is a rental, it is very much at the upper end of the market. For example, before it sold earlier this year for €1.2 million, number 24, a three-bed 172sq m (1,851sq ft) apartment in the new block to the rear had been an embassy let.

Number 8, a two bedroom second-floor apartment in the original building, is for sale through Lisney seeking €1.1 million. The owners bought in 2013, let it out for some years while they worked abroad before moving back in last year when they took the opportunity to redecorate. The recent arrival of their second child has prompted the sale.

Their grand apartment fronts on to Lower Mount Street with four tall sash windows – two belong to the living room, the adjoining dining room has the third and on through to the galley kitchen is the fourth. That detail as well as the tall ceilings means that the living room, with comfortable seating facing a feature fireplace, retains the atmosphere of a period home.

The bedrooms off the wide hall are to the rear – two doubles, one with en suite, facing out to the courtyard – and there is a small, fully tiled family bathroom. The main bedroom has its own terrace, accessed via French windows, and is large enough for a table and a couple of chairs.

In all, number 8, which is accessed by stairs and a lift, has 153sq m (1,647sq ft) and comes with one parking space in the underground car park where there is also a designated storage space. It’s worth noting that the annual service charge is €5,500 and there’s a concierge service.

How to manage your children’s screen time
5