Rare and striking example of an 18th-century home in Youghal, Co Cork with a fascinating history 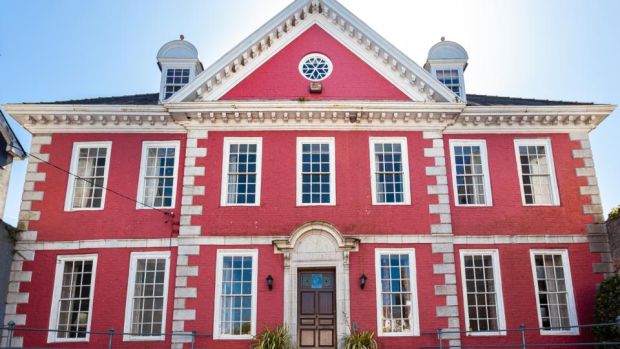 The Red House in Youghal is an important and rare example of an 18th-century house in Co Cork. Constructed in 1705 by Dutch architect and builder Claud Leuventhen for the prominent Uniake family of Co Cork, the 633sq m (6,818sq ft) property takes its name from the redbricks that were used in its construction.

During this period there was a successful shipping trade between Ireland and Holland and the influence of Dutch architecture began to be seen in Ireland. In port towns, buildings were often comprised entirely of brick imported as ballast from incoming ships.

The striking façade of the seven-bed house is set back from the main street, and while it occupies a central location in the town, it offers huge privacy in its 0.4-acre private garden.

While some alterations were introduced over its three-century existence, the extraordinary craftsmanship from the 18th century still survives, most notably in its interior wood panelling.

Traces of former owners can be seen in the terrazzo at the entrance installed by its then resident Thomas Farrell, local Justice of the Peace. (He also added a conservatory, purchased at the World Exhibition in Paris in the early 1900s, which blew away in a violent storm in the 1930s.)

The property, which is noted in the Buildings of Ireland survey, then became a parochial house until it was purchased by the late Eamon Keane in 1980.

Keane had been marketing director of Fáilte Ireland and went on to become an international tourism consultant, working for the EU and the EU Investment Bank.

The year he bought the property he met Helen, a German woman who was managing the Hotel Europe in Killarney. “I had been working in Germany, and worked very hard to make it to the top. At that time it was not normal for women to run hotels. I had a difficult year in Germany – as my father had died – and applied for two jobs, one of which was to run Hotel Europe,” recalls Helen.

At the time the president of Germany travelled to Dublin on a state visit and came to Killarney, where he invited many German citizens resident in Ireland, to stay in the five star hotel. Later that year, the Irish Hotels Federation held their first ever conference outside Dublin at the hotel. “I heard this very interesting man [Eamon Keane] speak at the event, and said to myself ‘this guy is really brilliant’. He came to a party at my apartment that night – which was my birthday – and we married the following year.”

“At that time The Red House was in a very bad state,” says Helen. “I would never have bought it, but Eamon really loved it, and it had a really good feel to it. However there was no heating, you could see the sky through certain sections of the roof, and it really had no kitchen – just a big concrete room.”

The renovation was an “ongoing process that took about six years” funded in phases when they had extra money for each step. “I have loved living here, but the children are scattered all over the globe, so it is time to move on,” Helen says.

“Everything is all around you, but you feel totally private,” she says in reference to the property’s central location and three nearby beaches and an 18-hole golf club within minutes.

The gardens are worth a special mention, and like the house, were heavily invested in when the couple had funds to spare.

Staying in Youghal due to the “friendliness of the people”, Helen hopes “to find a new owner, who will love the house as much” as she and Eamon did.