Redbrick home in Ballsbridge, Dublin 4, was granted permission to be extended to 7,500sq ft 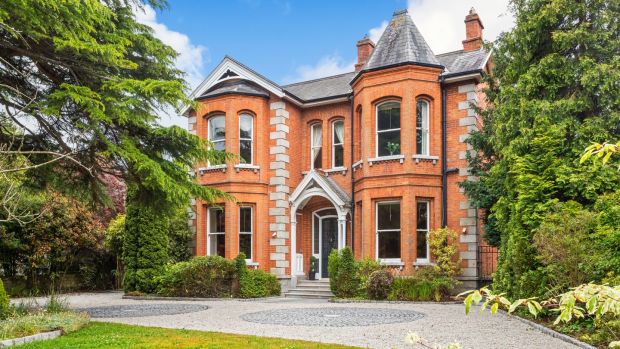 A framed letter “H” in old Gothic lettering greets you on the marble floor just inside the front door of St Peter’s, which is the last house on Ailesbury Road, next door to the Church of the Sacred Heart.

The initial belongs to Gerald Horan, who was first master of the rolls and subsequent master of the High Court in Ireland, having relinquished his position of permanent secretary to the lord chancellors with the establishment of independence in Ireland. He was very much involved in the transition stages of Ireland becoming a separate entity from the United Kingdom.

Though it was occupied by another family for the guts of 40 years, the house has since remained idle for almost a decade. It had originally sought €5 million in 2011, was subsequently reduced to €3.95 million, and in 2015 it eventually sold to Shane and Karen Reihill for €2.9 million.

The couple had sought permission to substantially increase the size of the house, which was eventually granted after some appeals were lodged by neighbour Pat Desmond. The plans included the demolition of an existing two-storey extension, to be replaced by a two-storey over-basement which would give the house – currently measuring 530sq m (5,702sq ft) – a whopping 697sq m (7,502sq ft) of floorspace.

Flanking the H in the marble hallway are two fine reception rooms, with bay windows so deep you could almost fit a bed in them. And from the imposing hallway, you can see not one, but four original fireplaces - one in the diningroom, two in the drawingroom and a good-sized topaz-coloured marble chimney piece in the hall itself.

The current extension is a bit odd, and it is no wonder that the owners wished to change it around. Compared to the rather gracious rooms to the front, the ones to the rear feel a tad pokey, but interest lies in what looks like a really old giant safe door – it is actually a door to a larder or cold room. While planning has lapsed, architects Sheehan and Barry are in the process of extending it, but what is important is the precedence for the planning itself, should new owners have different ideas.

Six bedrooms occupy upstairs, two over the main part of the house, and the rest lie in what is arranged like a wing – with its own staircase and entrance to the side of the house. The principal bedroom is quite incredible and together with its bathroom occupies the entire width of the property. The marble en-suite – with the bath positioned in the bay window so bathers can look out on the front garden – occupies 19sq m (204sq ft) alone, and an open fireplace lies in the hall between the bedroom and bathroom itself.

Heavy wallpaper and modern stained glass in some internal windows and doors actually fight with the period details as it all looks rather busy. But beyond the myriad of patterns and textures are the bones of a remarkable Victorian residence.

While the gardens were reduced many years ago to accommodate an apartment block next door, what remains to the rear is a paved area with a large cut-stone shed, and a fine-sized plot with both vehicular and pedestrian access to the front.

The property is now on the market through Hunters seeking € 4.85 million, which would be a nice return on the price achieved in 2015.