Ib Jorgensen sells up at 85: ‘Lockdown taught me I could live with retirement’

Gallery owner puts his Mount Merrion apartment, full of light and good ideas, on the market 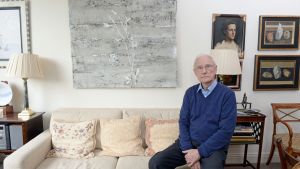 “Lockdown taught me that at 85, I could live with retirement,” says fashion designer and gallery owner Ib Jorgensen. “I don’t have to get up at 7.30am, I can go for walks in the afternoon.”

The lockdown triggered a number of changes in his life: later this year, he will be retiring from the art gallery he established above his city centre fashion salon in 1992, and he’s also downsizing from his very large, elegant apartment on the first floor of a development in Blackrock.

Now 153 The Elms, Mount Merrion Avenue, the 154sq m (1,657sq ft) three-bed which he bought several years ago, is for sale through Sherry FitzGerald for €975,000. It has been recently and very stylishly refurbished, with new bathrooms, kitchen and flooring – floors throughout are grey mountain oak. The apartment, rich with artwork and period furniture, is in meticulous condition throughout. It has an annual service charge of €2,750.

The taste and artistic flair is hardly surprising: Jorgensen, who arrived in Ireland with his family when he was 15, is one of Ireland’s most famous fashion designers. The National Museum at Collins Barracks has a retrospective of his work, which began in the late 1950s after he graduated from the Grafton Academy and set up his own design salon at the age of 22. He pursued his other passion, art, when he established his Jorgensen Gallery over 25 years ago.

A short flight of stairs – there is no lift – leads to the front door of the apartment, opening into a good-sized front hall. It has fitted bookshelves and a surprisingly large hall cupboard.

Perhaps the apartment’s most surprising feature is the very spacious livingroom/diningroom: it’s bright, with two large windows, glazed doors to a terrace, white walls, recessed lighting and white Adams-style marble fireplace. Furnished with handsome furniture that includes an antique Austrian rocking chair from his grandfather’s house and Danish china on the dining table, it adds period charm to a modern home.

The one thing Jorgensen will miss, he says, is the wide tiled terrace accessed through sliding glass doors from the livingroom/diningroom. It’s a very private space, filled with colourful plants looking over the garden of the apartment one floor below, which shelters behind very high bushes.

The smart kitchen/breakfastroom by Kitchen World has glossy taupe units, large fridge freezer and a utility room neatly hidden behind double doors.  There’s a hot press to one side of the utility room, a storage cupboard to the other – this apartment has a lot of storage.

The main bedroom has two sets of mirrored Sliderobes and a smart fully-tiled en suite shower room. The other two bedrooms are vividly painted, one a deep blue, the other turquoise. Both have fitted wardrobes and one opens on to another tiled terrace with a glazed rail overlooking parking spaces in The Elms. There’s a smart modern part-tiled family shower room off the hall.

Number 153 is one of the largest apartments in The Elms says agent Ronan O’Hara, explaining that it was two apartments until the first buyer asked that it be turned into one. The Elms is a 1980s development of over 100 apartments in a number of low-rise blocks in gated landscaped grounds on Mount Merrion Avenue, roughly half-way between Merrion Road and the N11.

Turn tomatoes and feta cheese into something magical
10