House on 6.5 acres commands open views of city and sea 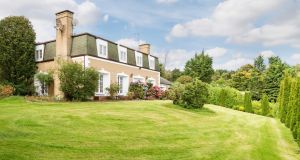 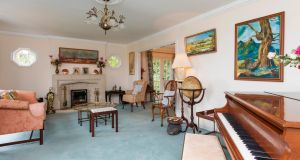 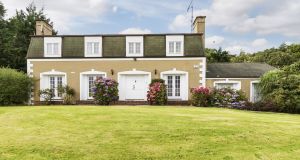 Higher even than Stepaside Village (which is a not inconsiderable 137m above sea level and just 1.6 miles away) Brackloon House faces the coast and has clear views across the city and sea, from Kilternan to Killiney Hill and Bray and, far away and in-between, a wide, wide horizon.

It sits on 6.5 green acres, almost all of it in a sweeping incline to the front, bounded by trees and most of it in meadow. Around Brackloon itself there are lush displays of hydrangea, fuchsia and other familiar perennials, all making the most of what is a fertile location.

The vendor built Brackloon in the mid-1970s, choosing the site precisely because of its views. Refurbished about eight years ago, the kitchen was updated and wooden floors laid. Lisney is asking €995,000.

The floor area covers 278 sq m (3,000 sq ft), there are four bedrooms (main en suite), three reception rooms, kitchen/breakfastroom, family bathroom and open plan, 100 sq m (1,050 sq ft) basement currently laid out as a games room with bar. There is a paddock to the side and ample parking.

The L-shaped livingroom, with adjoining diningroom, has arguably the best views in the house. It also has French doors to the front and rear and a feature sandstone fireplace. A separate drawingroom has a solid oak floor. There is a tiled floor in the fitted kitchen which needs further modernising and has a breakfast/dining area sitting into a box window over the garden. A one-time home office on this floor has become a wheelchair accessible shower room with access to a large garage. The latter could easily become a studio, or bigger office.

The main bedroom is a self-contained suite with its own sunroom, dressingroom and en suite bathroom. The other three bedrooms have built-in wardrobes. The basement has an official-looking bar and large leisure area.