Micheál Mac Liammóir and Hilton Edwards once lived in this spacious, bright house 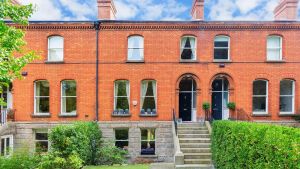 Dartmouth Square has seen quite a lot of activity since the introduction of the property price register in 2010. Of the 68 houses – all of which overlook the leafy park, on this quiet road that connects Ranelagh to Leeson Street, 18 have sold and three are on the market.

The reason the location is so popular is that the genteel square is set between the two main arteries running out to Dublin 6 and Dublin 4. In addition it enjoys two acres of communal Victorian gardens, which, after much controversy, are finally owned by Dublin City Council.

In the 1930s this property was home to dramatist, artist and painter Micheál Mac Liammóir, and his partner, Hilton Edwards, also an actor – who together founded the Gate Theatre while residing at No 61.

The pair were two of the most recognisable figures in the arts in Ireland during the last century, and at a time when homosexuality was illegal in Ireland, Eibhear Walshe of University College Cork described them as having “flourished as Ireland’s only visible gay couple”.

The Dublin Gay Theatre Festival has annual awards in both men’s names in recognition of their contribution to the arts, and they lie side by side at their resting place at St Fintan’s Cemetery in Sutton.

In 2006 the house was sold by Patrick Kennedy – the then head of Paddy Power, and current chairman of Bank of Ireland – for €3.9 million. The current owner purchased the property in 2012 for €1 million.

The property dates from the 1890s – Dartmouth was one of the last series of squares to be built in Dublin during the 19th century – and is on the south side of the square. It extends to 204sq m (2,196sq ft).

While spacious and in good condition albeit a lick of paint and a few new carpets would have it in turn-key shape, most of the neighbours along the square have extended to the rear, adding a full return on two or three levels – the aspect on this side of the square gives these rooms sunlight all afternoon.

At garden level there’s a lovely country-style kitchen, adjacent to an informal living room, which opens out to the rear garden.

Inside the front hallway are two well-proportioned formal reception rooms, which retain all their period features, and upstairs are four bedrooms.

Many of its peers along the road have amalgamated the two bedrooms to the front into one principal room – adding a further bedroom in a new return.

There is also precedent on the road for a self-contained unit such as a granny flat in the rear garden.

Sherry FitzGerald is seeking €1.75 million for the property. Farther up the road No 50, at 199sq m and needing work is on the market though JLL seeking €1.55 million, and No 5 at 188sq m and currently divided into flats, is seeking €1.45 million through Hunters.