Four years, one refurb and back on the market at nearly twice the price in D6

Four years and a major makeover later Dublin 6 home is for sale for €1.195m 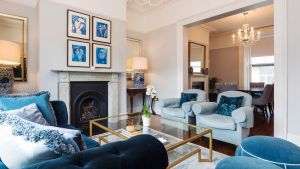 When number 23 Frankfort Avenue last sold in July 2013 it was asking €660,000. Less than four years later it is back on the market completely refurbished and upgraded. The asking price this time around is almost double that of four years ago and shows how much prices have bounced back in that short time.

The house is in walk-in condition starting with a lush but easy to maintain front garden designed by Paul Doyle. The mid-terrace Victorian property opens into an amber-coloured parquet hall with two fine interconnecting rooms to the left. Here the owners have made the most of the property’s original features by showcasing the area above the dado rail in white, while painting below in a soft Dior grey. Both rooms have cast-iron fire surrounds with the sitting room to the front boasting a marble fireplace. The mix of antiques, colour pops in decorative accessories and some classic contemporary furniture has elevated these rooms into really appealing spaces.

To the rear they added a large dual aspect extension creating an internal courtyard between the old and new parts of the house to maximize light. This was designed by architect Paul Keenan of Keenan Lynch.

The extension is the width of the plot and is also lit from above by a lantern roof light. Housing the eat-in kitchen and a living room that overlooks the garden it is a homely space in which to spend a lot of time. The owners designed the kitchen themselves and had cabinet-maker Brian Dempsey execute their idea. It features a smart seven-hob Belling range and double Belfast sinks. There’s also plenty of storage, a small guest wc and a utility room at this level.

The first of the property’s three bedrooms is on the return. Dual aspect, it can house a double bed but is home to two children’s beds.

There are a further two bedrooms on the first floor. The master is the width of the house, and has his and hers wardrobes filling each end wall with lots of storage space and a shower en suite, using space taken from the back bedroom and lit by a roof light

The garden, south-east facing in aspect, has a lovely slabbed patio and pedestrian rear access that could, subject to planning, be converted into vehicular rear access.