Family gem with sociable layout in Ballsbridge for €1.05m 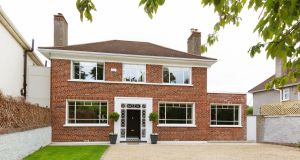 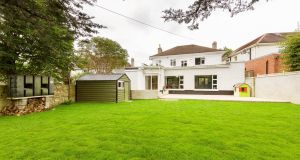 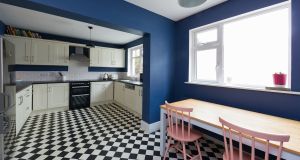 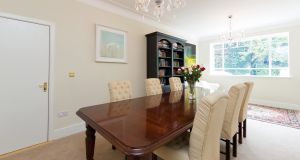 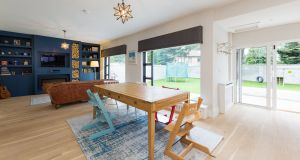 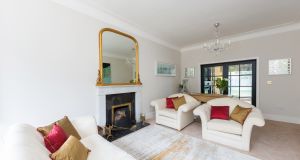 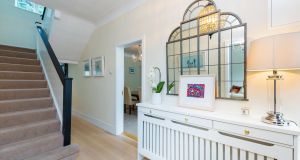 Shallon, a 214sq m (2,303sq ft) property located just opposite Wanderers Rugby Club on Merrion Road is home to solicitor Larry Fenelon and his family. Fenelon, managing partner at Leman Solicitors, purchased the property from the Dolan family of the legendary Davy Byrne’s pub in 2012.

As the property had not been upgraded since its construction in the 1950s, Fenelon engaged interior designer Catherine Flannery of Level Interior Design to completely overhaul the house.

After rewiring and replumbing, the house was insulated and Crittall windows were installed. A former garage was rebuilt as an en-suite bedroom bringing the total number of bedrooms to five – four fine doubles and a nursery which could also function as a home office.

The old kitchen, which had no windows was extended and now houses a fine-sized kitchen which sits adjacent to a new bathroom and utility.

Flannery designed a striking wall unit – which houses the television and log gas fire – in the family room overlooking the 260sq m (2,798sq ft) rear garden. The unit was painted in a strong blue and this tone is further used in the kitchen and master bedroom. Other details such as panelling on the stairs and a built-in unit for the hallway indicate clever attention to detail throughout.

The rear garden with a simple layout, centres around a towering spruce pine. It is overlooked by a property to the rear – but this could be easily rectified with some strategic planting, and the garden is very secure for younger family members to play in.

“Our home has a very sociable layout, my grandmother lived two doors up and Mrs Dolan regularly threw parties here,” says Fenelon who is moving to a larger property nearby.

Both drawing and dining rooms, which flank the hall, lead to the family room – which runs the entire width of the property, through interior French doors, allowing a great flow for large numbers of people.

Fenelon, meanwhile, is preparing for his 40th birthday party at which 120 guests will enjoy clear tipples in a bid to protect brand new pale wool carpets.

Shallon with an advised minimum value (AMV) of €1.05 million will be auctioned by Ganly Walters on October 12th.