Well-located, five-bedroom home has its own cinema, putting green and a mature garden 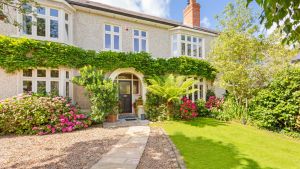 This article is 4 months old
View this property listing

Number 5 Nutley Park, a semi-detached Crampton-built home dating from the 1930s, will appeal to househunters at the upper end of the south Dublin market.

Its setting, just off Nutley Lane in a tree-lined road – essentially a cul-de-sac – allows a convenient location close to UCD and some of the city’s most popular schools.

In addition Elm Park Golf Club is a short walk around the corner, with tennis and cricket also nearby.

St Vincent’s hospital – a 10-minute walk – was a godsend for the current owners whose sons ended up there over the years with various rugby injuries. Its proximity meant the family could deliver hot homemade dinners from their kitchen to the hospital bed within minutes.

The property, purchased by the owners in 2002, underwent a complete renovation in 2010. Its new BER rating of B3 is an indication of the level of works carried out in this house, which is just short of a century old.

Under the guidance of Desmond Barry of Sheehan Barry Architects, a seamless extension was added in the form of a kitchen-cum-diningroom and sunroom at garden level with a bedroom wing upstairs.

In addition the attic was converted to give a large en-suite guest bedroom and a home cinema complete with surround sound – a great space for teenagers to hang out in with friends.

The property has five bedrooms in total, with the main suite occupying the entire front of the house.

Off the spacious hallway lies a study, a formal livingroom and the extension which includes a high-end kitchen by Newcastle Design, a sunroom and a further livingroom.

The extension is really something, as it is not the typical glass box that is added to so many houses. It fits perfectly with the original house, and feels as if it was always part of this fine 260sq m (2,800sq ft) home.

But for many buyers it’s the rear garden that will clinch the deal, as this is a major selling point of this property. It is filled with mature plants and shrubs with an old apple and pear tree providing shade as well as fruit.  Its southwesterly aspect gives sun all day long, and is not overlooked.

Golf aficionados will appreciate the purpose-built putting green in the centre of the lawn, which was completely excavated and built to golf club standards. “There was a digger in here for ages, and then after excavating down, the green was filled with exact layers of sand to the standard of Elm Park around the corner,” says the owner.

For maintenance the family have two lawn mowers; one for the lawn and the second for the putting green to keep it in top condition.

Houses in this location are always in demand, not just because of the convenient location, but also for their large gardens and quiet setting.

The owners are trading down and have placed their turnkey home on the market through DNG seeking €1.75 million.

The Roscommon man who became a sumo wrestler in Japan
10