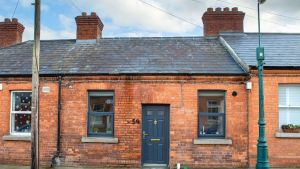 Houses at Pembroke Cottages – a quiet little enclave behind now shuttered Kiely’s Pub in Donnybrook – are changing hands at quite a rate, with 10 properties trading since 2019.

Renovated properties are now achieving in the region of €650,000 – where the upstairs has been converted into a third bedroom, increasing the floor space from about 50sq m (538sq ft) to 75sq m (807sq ft).

Number 59, which sold last year for €415,000 when it measured 51sq m (548sq ft) and needed total renovation, has just been brought to market through Lisney seeking €650,000. The old photographs are still up online on myhome.ie and provide a good insight to the transformation.

This is the fifth property that the current owner has flipped in recent years. “Although we have a team that can now turn these houses around quite quickly, the issue this year was waiting for the builders as they were so busy. Also we had an issue getting steel and some plumbing parts so it took longer than usual,” says the solicitor owner.

Another issue with renovating these properties is the thickness of the walls: “As we were left with just the front walls, it was a serious expense to knock the rest, but the new layout is far more pleasing than the old.”

The space now measures 75sq m (807sq ft) and has a double bedroom upstairs which has the benefit of being en suite.

“Buyers really appreciate that these are more like new homes, as the entire place has been gutted and everything is brand new,” says the owner of the new ergonomic layout – where the second bedroom was moved to the rear allowing a large open-plan space just inside the front door.

An added bonus is that the BER has improved substantially from an F to a B3.

The last three properties the owner sold in the area were to family investors with children attending college in UCD. “Their child lives in the bedroom upstairs and the two other bedrooms are rented to their friends.”

Stephen Day of Lisney, who is handling the sale, explains the figures: “Most people will have in the region of a 25 per cent deposit for an investment property like this. They will get €750 a month – which are mates’ rates for the two downstairs bedrooms – bringing in €1,500 per month. Repayments against a €520,000 investment mortgage at 4 per cent will be in the region of €1,700 a month. This makes a lot of sense for someone who has a child at college as they do not have to fork out rent for their child and they have an investment property that almost pays for itself.”

The proximity of the tucked away property not just to UCD but to the city centre itself makes this an attractive investor property.