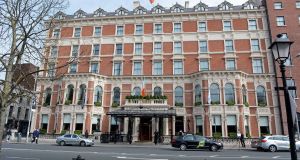 The Shelbourne Hotel on St Stephen’s Green was only heaving on Tuesday evening with perma-tanned men, perfectly coiffed women and whiter than white smiles all round. And where better for Christie’s International Real Estate top brass to gather for their annual conference than within the newly refurbished walls of one of Dublin’s landmark buildings.

Not a bad coup for Dublin – and Christie’s Irish affiliate Sherry FitzGerald – as previous glamorous locations for the luxury real estate brand have included New York, Miami, Barcelona, Bermuda and Toronto. More than 100 Christies agents gathered from some 27 countries worldwide, and in the early evening sunshine they were all clearly looking forward to the craic over the following three days. Entertainment highlights would include an Oirish evening in the Guinness Storehouse followed by a gala awards dinner within the hallowed grounds of Trinity College this evening.

Of course a sojourn in Ireland wouldn’t be complete without a whistlestop tour of some of Christie’s Irish properties. A tight schedule apparently ruled out a visit beyond the Pale to some of the finer country estates, including noteworthy Glin Castle, but it’s highly likely a certain famous garden in Ranelagh that recently came on the market (with house included!) for €4.6 million would be included in any jaunt through deepest south Dublin. Helen Dillon’s garden aside, it’s also safe to assume the winding coastal roads of Dalkey and Killiney will be well beaten with busloads of gawping agents allegedly viewing the fine Christie’s listings in that parish. Though really we know they were all secretly just hoping for a goo of Bono out walking the dog.

What is the going rate for a home in...Co Kilkenny?
5

From Marianne to Claudia Winkleman: The rise of the lockdown fringe
8