A tale of two buildings: Rathfarnham cottage with eco-friendly extension for €600,000 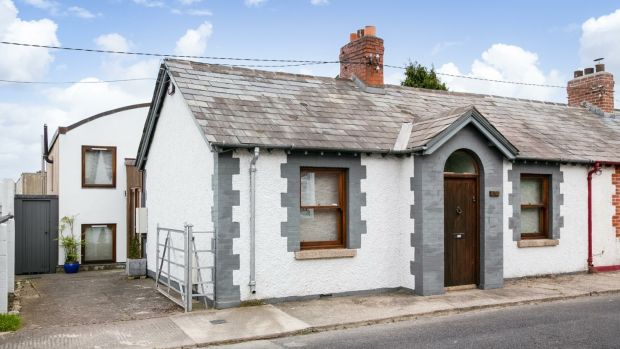 Number 16 St Patrick’s Cottages in Rathfarnham, an early 20th-century home that its owner bought in near-original condition – complete with outhouse – has been brought into the 21st century thanks to a low-key, eco refurbishment.

The house is a tale of two constructions: one artisan, the other future-proofed and farm-like, woven together to create a sizeable family home in walk-in condition.

A millennium purchase and then just 50sq m, the owner insulated it and opened up the ceiling heights to better enjoy their lofty volume before moving in. Seven years later he hired Brian O’Brien of Solearth Architects to enlarge the property, which is secreted off Grange Road.

One of the early adaptors of green technologies, the practice flipped the layout to turn the back of the original house into what is now the front entrance hall and adding a double–height, barn-like extension to fit two additional bedrooms and a kitchen-cum-family room. These benefit from the solar gain of its south-easterly aspect and open directly into the garden.

The new part has aged beautifully. The timber construction is warmed by underfloor heating, run by a pellet-burning boiler, has cellulose insulation made from recycled newspapers, a copper roof that is beginning to patinate to green, and cedar cladding that has weathered to a silvery grey.

The pointed granite exterior of the back of the cottage is exposed in the hall where there is an office desk , and the living room is to the front, where one of the property’s three bedrooms is also located.

The original timber doors have been stripped and the original part of the house – a protected structure, with stone walls and open fireplaces – countering the new-build green advancements and reducing the Ber to a D2 rating.

The kitchen, down a set of steps, features units by QK Living that are set out in an L-shape and have solid walnut countertops.

From here you step down to the family room, which has glazing on two sides and opens out to a well-planted garden that extends to about 36sq m. The owner salvaged the gooseberry bushes and old roses that he inherited with the house.

His new planting includes a wedding-cake tree, caster oil-tree and a tree fern that have all matured beautifully over the past 15 years. Granite blocks from the original cottage were repurposed to create the dry walls around the space, now curved bench seating set around a barbecue/fire pit.

Upstairs there are two double bedrooms that share a bathroom. The main room overlooks the garden and while light-filled remains extremely private, a bit like the house itself, which was built by Martin Sherwin Allservices.