Lisa Godson: Could someone please design a better speculum?

Given the success of Irish design and manufacture of medical devices, there is potential to come up with a new way of examining the cervix 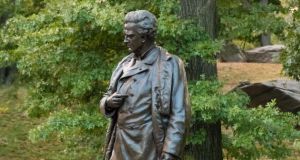 The statue to the controversial J Marion Sims, the ‘father of gynaecology’, in Central Park in New York. Photograph: Roberto Machado Noa/LightRocket/Getty Images

One of the success stories of Irish design and manufacturing has been in the area of medical devices, where postgraduate design courses have flourished and where there seems to be plenty of research funding.

Seemingly innocuous in form and intent, a darker history clings to certain medical instruments, perhaps most potently the vaginal speculum, used to examine the cervix.

One widely used model is the Sims speculum, named after its inventor J Marion Sims (1813-1883). Sometimes called the “father of gynaecology”, there is a statue to him in Central Park in New York and one of Ireland’s leading fertility clinics is named in his honour. However, debate has ragedabout the seemliness of celebrating such a figure as he carried out experimental gynaecological surgeries on enslaved women in Alabama in the 1840s.

Keeping his subjects in a small 16-bed ‘hospital’ in his back yard, Sims designed and devised various instruments and procedures to test on his subjects for up to four years. While we know the names of only three of these experimentees – Anarcha, Lucy and Betsey – Sims’s own memoirs describe the almost countless operations they and other anonymous slave women underwent at his hands.

On moving to New York, Sims opened the first US women’s hospital in 1855. His experiments continued, sometimes on Irish emigrants; a Mary Smith, for example, underwent 30 surgeries. Now deemed by some historians as a racial vivisectionist, Sims was celebrated in his home country and Europe. He treated Empress Eugénie, wife of Napoleon III, and in 1861 gave a demonstration in the Rotunda Hospital in Dublin, where he dined with “some of the leading men of the day”.

Another point that must be reckoned with in understanding the history of the speculum is the implementation of the Contagious Diseases Acts of the 1860s. Enacted to “protect” the British military from venereal diseases in particular, this legislation empowered police, including plain-clothes police, to apprehend and incarcerate any woman suspected of prostitution and compel her to undergo examination by a speculum to ascertain whether she had a disease.

Initially, the law was applied in select parts of the empire, for example in India, and then later in garrison and port towns including Dublin, the Curragh and Cork. Campaigns against the Act, particularly as led by Josephine Butler and Isabella Tod, are significant partly in relation to how they informed the suffragette movement and also in their focus on the speculum, with the term “steel rape” used by one of Butler’s supporters.

The threat of examination by the instrument hung over women in certain areas, particularly as the campaign to repeal the Acts publicised examples of its aggressive application as in the case of Caroline Wyburgh who walked out with her soldier boyfriend and was incarcerated before being inspected violently.

Independent women’s health clinics encouraged self-examination in the 1970s, supplying speculums and mirrors to their patients, and the spirit of self-knowledge informs the work of the Catalan collective GynePunk. Emerging from the hacker movement, founding member Klau Kinki describes their practice as a “riot of bodies” and publicises DIY techniques such as a simple vinegar test to check for cell mutations as well as providing files for 3D printing of a speculum. Frustrated at what she describes as the “colonisation” of women’s anatomy by men – for example, in the naming of certain organs – Kinki has renamed parts of her own body in tribute to those three slaves Sims experimented on, so instead of having a Skene’s gland she now has an Anarcha one.

Unwanted examination via speculum has not gone away. A member of the Russian punk group Pussy Riot has spoken about forced pelvic exams occurring with great frequency. And only lately have Canadian medical students been required to ask for explicit consent to perform pelvic exams when a patient is under general anaesthetic.

While “user-centered” design has become almost a truism over the past decade, research into the way the speculum is marketed shows the user is considered to be the doctor performing the exam, rather than the woman at the other end. While visibility of the “field” and comfortable grip of the speculum are often championed, the sensing, feeling, human patient at the other end of the instrument seems less of a priority. With so much innovation happening in medical device design in Ireland, it would be fascinating to see a new form of speculum or procedure emerge that might be able to ease some of its nefarious associations.

In a reference to the controversial Pantibar sign in the column published on July 9th, it was stated that the bar’s owner, Rory O’Neill, had been approached by one of the objectors to the sign with a request for a payment of money to drop his objection. Pat Coyne and Ken O’Reilly, who are among the objectors to the sign, have pointed out that they have not made any such approach to Mr O’Neill.