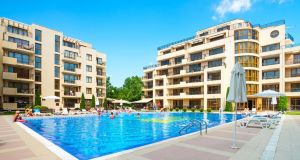 The Sunny Victory apartment complex in Bulgaria’s coastal resort of Sunny Beach: the market is seeing an increase in conveyancing issues

A number of Irish owners on the Sunny Victory apartment complex in Bulgaria’s coastal resort of Sunny Beach have been left angry, bemused and seriously out of pocket.

It is an unusual story. There were no building issues, and the development was completed, apparently with little complication. Owners took possession of their properties and it is being successfully managed with decent occupancy rates. The properties have been paid for in full and owners had received unencumbered title deeds – or so they thought.

Properties in Sunny Victory were sold from 2006, when Irish investors were significant buyers of coastal Bulgarian property. The development completed, apparently without issue, in 2008.

The complex is a favourite with visitors, offering comfortable apartments, good facilities and a convenient location. It is situated in the quieter northern part of the resort town, a short walk from the beach and the resort’s lively promenade. Owners were, in the main, happy with their purchases.

It is being explained locally as a “perfect storm”. When purchasers’ legal representatives searched the land registry for liens on the land on which the development was built they found none, because Bulgaria’s land registry was incapable of handling the level of transactions occurring at the time. It is estimated as many as 100,000 properties per year were sold over the period 2002-2006. The Bulgarian land registry at this stage was antiquated and incompatible with such transaction levels.

It was not uncommon for liens to take many months to be officially noted on title deeds. It left a critical period within which obfuscation or downright fraud could be exercised. Although it seems like a legal problem, it is being explained as an administrative issue, which is obviously no consolation to those involved.

The developer, Sunny VIP Tours, took loans on the land to fund the development but did not disclose this when properties were closing.

As far as the buyers’ legal representatives could tell, their clients were purchasing properties free of debt, when in fact they were not. Some owners reject this explanation, claiming that those with more efficient, or less conflicted, legal representation managed to secure their properties debt-free.

Dylan Cullen of Appreciating Assets, a company selling Bulgarian properties for UK and Irish owners, says that as the Bulgarian property market matures it is seeing an increase in the number of conveyancing issues with properties that are changing hands for the first time.

So why did it take until 2015 for the bank to call in its loans? The developer did not fall into arrears until 2012 and, once it did, the reclaim process via the Bulgarian legal system is painfully slow. Tokuda Bank has taken the intervening years to get legal access to the block of properties.

As if this were not bad enough, many of the owners in question had no idea their properties were being repossessed.

The bank is obliged to send notification to the properties in question, not the home address of the owners.

It is claimed that in many cases the bank did not even do this. Some have received a registered letter from Tanya Madzharova, a private bailiff in Bourgas, declaring a “scheduled inventory listing to a third-person acquirer of a mortgaged property” followed by pages of Bulgarian legal information. The Irish Times requested comments from solicitors who carried out conveyancing on properties in Sunny Victory but none availed of the opportunity, citing “client confidentiality”.

Tokuda Bank also declined to comment on the matter, despite being offered the opportunity. If you feel you have been defrauded in a Bulgarian property transaction, you should contact the Bulgarian prosecutor’s office at prb.bg/en/contacts.