We can hear our neighbours through the walls, what can we do? 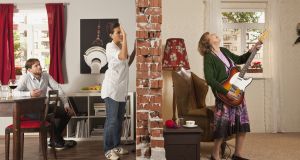 It is very difficult to soundproof an existing wall particularly around floors, ceilings and adjoining partitions

We bought a terraced house in a development built in 2006 and it turns out the walls are paper thin. We can hear the neighbours talking to each other and worse. How can we block out the sounds?

Sound transfer between houses is a common problem in properties built during the rush of the Celtic Tiger. Lack of attention to detail in many cases has resulted in poor-quality construction. The sound transfer occurs as a result of airborne noise (voices, music, etc). The airborne sound wave strikes the wall and the pressure variations cause the wall to vibrate. This vibrational energy is transferred through the wall and radiated as airborne sound on the other side.

The main issue is the quality of the mortar bed and pointing in the party wall during construction stage. Most party walls are a 100mm (4in) solid block on the flat which is adequate if done correctly and compliant with building regulations.

A good block layer will trowel on an even bed of mortar of approximately 10mm thickness with no voids or gaps. Once the block is laid he will then run the trowel along the finished joint both horizontally and vertically before moving on to the next layer of blocks. Alas this skill was lost for some time and, in the rush to build 250 blocks in a day, the tradesmen slapped a daub of mortar on to the previous layer and pressed on with gaps and voids and no pointing up of the mortar joints.

What can you do retrospectively? It is very difficult to soundproof an existing wall particularly around floors, ceilings and adjoining partitions.

In all, there are three ways to soundproof a concrete block party wall and some combination of all three may need to be considered depending on your house type and room layout, etc:

In an ideal world with full access to the party wall the walls should be repointed and rendered with a sand cement render of 12mm. The idea is to add mass to the wall to absorb the sound. Alternatively a sound insulation board will assist but the tricky areas are within the depth of the floors and ceilings and where partitions abut the party wall. The adjoining plasterboard slab lining to the ceiling and abutting partitions will have to be cut back to facilitate access to 100 per cent of the party wall surface.

In order to treat flanking noise, it may be necessary to lift floorboards or cut open the ceiling under the floor along the party wall and fill with a lining board and/or sand pugging to add mass to the floor and improve sound insulation.

Further difficulty arises where a floor joist runs parallel to the party wall with no space for access between it and the wall. Some form of boxing out may need to be considered. If your property is of timber frames construction there are additional issues to be considered.

Retro-fitting to improve sound insulation is difficult to achieve and not always 100 per cent successful. We recommend you have a sound test done between dwellings before embarking on expensive insulation works. This should include both airborne and impact sound tests to ensure compliance with the 2014 Building Regulations Technical Guidance Document E (Sound).

It is worth noting that your neighbour may be experiencing similar issues and working on both sides of the wall is more effective in improving sound insulation.

What will €445k buy in Dublin 2, Portugal, Spain, France and England?