Kate O’Toole: It's time for dinner plates, not slates

I realise there’s a recession, but do we really have to go back to eating off trenchers, like medieval serfs? 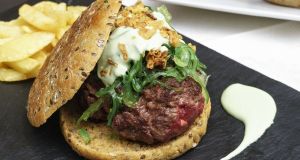 Platter matters: Ordinary plates are becoming an endangered species, which is odd considering their design has yet to be bettered. Photograph: Thinkstock

Sophistication is no safeguard against the slings and arrows of outrageous fashion. From high-end restaurant to lowly public house, nowhere is safe. Crimes against crockery are being committed across the land. Ordinary plates are becoming an endangered species, which is odd considering their design has yet to be bettered. Even the swankiest establishments are falling over themselves to invent risible alternatives.

A friend brought me to a smart city- centre restaurant in receipt of well- deserved plaudits, the sort of place designed to help you forget the cares of the world as soon as you cross the threshold. An inscrutable maître d’ offered a stately welcome and led us into a dining room with tranquil, seductive lighting that instantly reduced the brain’s alpha waves. Fine crystal twinkled in the gloaming. An obeisance of waiters crept about with pitch-perfect attendance, neither neglectful nor intrusive. Enormous hardback menus were provided, each so tall and robust it could have served as a fireguard in my living room. A Michelin-quality feast was ordered, the company was agreeable and the conversation stimulating. There was absolutely no indication things were about to go horribly wrong.

Back in the elegant 21st-century restaurant with my blissful dining experience now shattered, I realised worse was inevitable. Sure enough the main course came on the obligatory shard of slate. Dessert arrived on a small slab of cream- coloured marble, which I bit into, having mistaken the slab for a piece of cheese in the sexy dim lighting. My bouche was not amused; it’s a wonder I didn’t lose a tooth.

This happened years ago, when it was fashionable to use inappropriate objects as tableware. The fad has since gone mainstream, with all manner of unappetising results. Many chefs and food writers have railed against the practice, among them the former MasterChef judge William Sitwell, who goes so far as to say food should not be served upon anything with a right angle, and that even square plates are an abomination.

He wouldn’t have approved of the pub I ate lunch in recently, where everything was served on scuffed wooden chopping boards. I realise there’s a recession but unless we’re in Bunratty Castle do we really have to go back to eating off trenchers, like medieval serfs? Side salads with their oily dressings slithered off rimless edges, putting me in mind of lemmings going over a cliff. Try eating a toasted sandwich off a surface that acts as a trampoline, bouncing the crumbs into your fellow diners’ laps. It was all a bit sad and grim. The wooden boards sitting on similar wooden tables strewn with other peoples’ food particles made the very idea of using a plate almost redundant. In Virgil’s Aeneid the chief of the Furies warns Aeneas:

“Never shall you build your promised city

Until the injury you did

Has brought you to a hunger so cruel

That you gnaw your very tables.”

We really need to move on from this.

The problem is one of form being divorced from function. The mystery is why whimsical tableware is still considered a good idea when it’s long past its sell- by date. Perhaps it has something to do with another trend, the one for taking pictures of our food then posting the results online. Good old Limoges probably doesn’t look very exciting on Instagram. Steak au poivre thrown into a miniature bin lid is, no doubt, more visually entertaining than if it just sat minding its own business on a regular platter.

Calamari in a clog

Kate O’Toole is an actor and a recovering Facebook addict

Paul Flynn: How to cook the perfect chowder – don’t use flour and keep it simple
3