Interiors stores opening their doors, a splash of summer blue, and art from Drogheda 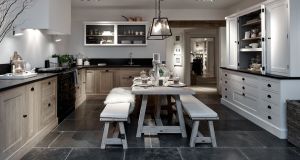 Neptune is set to open its first Irish flagship store on Belfast’s Ormeau Road this summer. Based in the Ormeau bakery, the 5,000 sq ft store will have the full collection, from kitchen, dining and living, bedroom, bathroom, to outdoor furnishings, accessories and lighting. 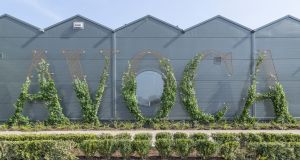 The new Avoca shop at Dunboyne will have some new features such as an Avoca farm, where salads and veg for its new Fork cafe will be grown 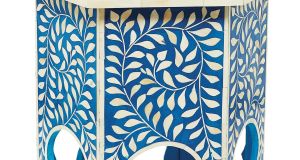 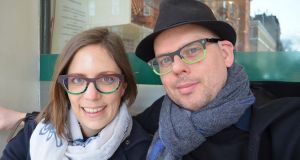 Artists Declan Kelly of Drogheda and Els Borghart, of Ghent, who have just set up EDDE, a studio and online art store 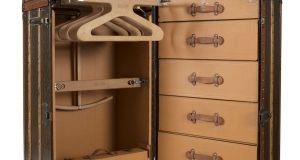 This vintage ‘Gentleman’s Wardrobe Trunk’ by Louis Vuitton has the company’s signature monogrammed canvas and a sophistcated interior. Made some time between 1930 and 1950, it is to be auctioned by Adam’s and has a guide price of €4,000-€6,000

A month after it sold a Louis Vuitton steamer trunk for €7,500 Adams has yet another model in its upcoming Home auction on April 9th, this time with a guide price of €4,000-€6,000. Lot 230 is described as a Gentleman’s wardrobe Trunk with the company’s signature monogrammed canvas and with a sophistcated interior. It opens to reveal hanging space, complete with original stamped hangers, while the other side is fitted with drawers that would have taken such essentials as pullovers, shirts and undies, all of them protected by inbuilt dust sheets. The trunk still carries labels from the Cunard Line voyage from New York to Dublin in December 1966 when it was the luggage of a passenger O’Mahony. Little more is known about the trunk, except that it is thought to have been made sometime between 1930 and 1950. It’s not as old as the previously sold trunk, which was snapped up by an Italian collector at Adam’s, but it is in significantly better condition according to director James O’Halloran. See adams.ie

Neptune, the furnishings and kitchen brand that channels a cool Scandi look, continues to grow in Ireland and the UK with a new flagship store due to open Belfast’s Ormeau Road this summer. The chain, which originated in the UK but has a series of partnership stores across Ireland, has now taken over the Ormeau bakery building, a Victorian redbrick block that’s about to get at £750,000 facelift. Most of the ground floor will be transformed into a Neptune showroom showing the full range of the furniture, kitchens, fabrics and accessories

Neptune’s Fergal McAdam, who is also the director of Neptune by Malone & Smyth in Co Fermanagh, says the Ormeau Road is a fantastic location and it is a privilege to breathe new life into the iconic Ormeau Bakery,” “The area is really taking off, with new restaurants, cafes and bars complementing the existing businesses.” Work on the building is due to begin shortly and the store will open its doors for trading in late summer. See neptune.com

Meet artists Declan Kelly of Drogheda and Els Borghart, of Ghent, who met as fine art students at the Sligo It and Ghent LUCA School of Art and who have just set up EDDE, a studio and online art store with the mission of introducing colour into peoples’ homes. Using traditional hand-crafted art combined with modern cutting-edge printing technology, EDDE offers quality art prints at reasonable prices. Working from the motto “Art for you!” the collection of work available was developed from a suite of original artworks created over the past 15 months. Each work was then reproduced as a premium fine art print using the “giclee” method, a cutting-edge printing technology. There are 34 prints available, including a variety of animal pictures such as Dreamy Deer and Night Time Elegance, a cat study. The duo work with Fine Art Print Studio in Waterford to print the material , for which prices start at €44. See eddeart.com

Ikea for the Algarve

Villa owners on the Algarve will be relieved to hear that Ikea has finally arrived in the neighbourhood, with a new €200 million store opening this week on the outskirts of Loule. It’s the first Ikea on the Algarve and the fifth in Portugal, and it’s the anchor for Mar Shopping Algarve, a vast complex that is due to open fully in the autumn and will have 110 stores including designer outlets, cinemans, the and a hypermarket. In a statement, Ikea said the new area will take the concept of family-friendly shopping to a new level, with the shopping centre almost assuming theme-park proportions. Hopefully shoppers will not abandon Loule as a shopping destination: its side streets are a great place to trawl for specialities such as traditional white cotton cotton rugs, still made in Portugal, and hand painted crockery rugs. Meanwhile property agencies are hailing the arrival of the Swedish giant as yet another reason to invest in the Algarve. See portugalproperty.com

Avoca is putting the finishing touchs to its new Dunboyne store which is due to open on Wednesday April 5th and promises to have all the usual Avoca treats across food and homewares. It will also have some new features such as an Avoca farm, where salads and veg for its new Fork cafe will be grown; a big garden centre; and an expanded food market with a pizza van, a Sprout and the Avoca butcher. Books, jewellery and a beauty section are there for the browsers along with the latest designs in throws and rugs from the Avoca Mill and a big range of men’s fashion. For directions and opening hours see avoca.ie