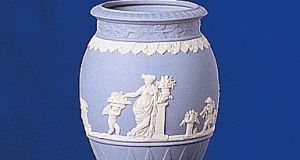 What is it that has made Wedgwood Jasperware so unpopular, a classic design that seems simply old-fashioned?

It is not the blue. Colours close to Wedgwood blue – a chalky lightish blue nearer to grey than a strong blue – are very fashionable for walls, kitchen cupboards and bathroom tiling.

It might be the shapes because, for every simple urn-type vase (like the one shown here), there are heart-shaped trinket boxes and pieces that scream fussiness and clutter.

Or it could be the decorative detailing in white relief, those classical motifs borrowed from Roman, Greek and Egyptian mythology that seem simply too much given the fashion for pared-down patterns.

We like retro influences but not, it seems, when those influences – the shapes and styles – stretch back in the mists of time to the ancient world.

Wedgwood Jasperware – named after the mineral jasper – is a type of porcelain created by the British visionary potter and businessman Josiah Wedgwood.

It is unusual in that it has a matte finish – that should enhance its appeal now but somehow doesn’t. And while blue is the signature colour, Wedgwood also made Jasperware in different colours including black and green.

Neoclassical motifs were popular decorative features in the late 1700s and they could be seen in the plasterwork in great houses and in painted furniture.

A Wedgwood employee, a young sculptor named John Flaxman, was particularly drawn to them. When he saw the Portland Vase, a cameo glass Greek vase owned by his boss’s friend Sir William Hamilton, he set about trying to replicate its raised classical figures on a plain background in the newly discovered Jasperware.

It was a huge success for very a long time – just not at the moment.