At home with Pigsy, architect by day, artist by night

Pieces of me: Ciarán McCoy escapes the exacting world of architecture with his wild art 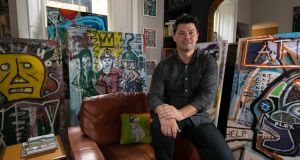 Ciaran McCoy: “In my art I am the complete opposite of my architectural self.” Photograph: Shane O’Neill

Ciarán McCoy is a founding partner in ODKM Architects, a practice where Declan O’Donnell is probably the best-known principal because of his work as presenter of RTÉ’s Home of the Year show.

However, it is McCoy’s home that sits on the front page of the practice’s website.

By day he’s all about precision, form and function;but by night McCoy operates as a much looser, free-form expressionist painter under the name Pigsy, a nickname he was given by his friends at school because they thought he looked like the character of the same name from the cult Japanese TV series Monkey. He grew up on the Navan Road and went to school in Coláiste Mhuire, then on Parnell Square, next door to the Hugh Lane Gallery, which is where he first got interested in art. “I liked its solitude and the space the paintings were given. You could lose yourself in its atmosphere.”

But it was also in his genes. His father Brian McCoy was a hobbyist artist who exhibited in the local library in Cabra. “I was more of a jock as a teenager,” he recalls. “If my pals had known I was painting they would have slagged the bejaysus out of me. I didn’t take it up again until I was about 27.

“In my art I am the complete opposite of my architectural self – it is expressionist in style. I wanted to detach from my formal architecture by using an alias and use chalks, oils, acrylics and even household paints – often the cheapest thing I can lay my hands on. I even negotiate throwaways from trade paint shops.”

Describe your style. I’m a fan of organic architecture, of which Frank Lloyd Wright is considered the godfather. I also love the mid-century homes of modernist John Lautner, who was a student of Lloyd Wright.

The room in your home you most enjoy? The house is a Victorian property so the proportions were already there and I’ve tried to bring an exciting sense of the mid-century to it. I’ve reused all the old hand-made bricks so that there’s a nice flow to the space and that there is light in all the correct places. Some areas don’t have to be overly bright as long as the kitchen and living spaces are light-filled. You want a space that makes you feel alert when you wake up in the morning. In the evening you want to spend time in a space that makes you feel relaxed and stress-free. I try to rise with the sun and go to sleep when it is going down. I share the house with my wife, Enid Bebbington, and our dog, Dr Bones McCoy, a shih tzu named after the character, Dr Leonard H “Bones” McCoy in the TV series Star Trek.

The room I most enjoy is the one with a conversation pit, which is to the right of the hall when you open the front door. I was inspired by Sam Stephenson’s design for his own home on Leeson Lane and decided to take out the whole floor and part of the wall. I got the cushions upholstered in a DIY shop. Because of their substantial weight they don’t tend to move.

The items you love most? The work of minimalist architect Peter Zumthor who won the 2009 Pritzker Prize for a field chapel dedicated to the Swiss saint Nicholas von der Flüe, known as Brother Klaus, and the 2013 RIBA Royal Gold Medal for his significant influence on the advancement of architecture. His work includes the wonderful use of natural materials in Therme Vals, a Swiss spa, and the Austrian art gallery Kunsthaus Bregenz. I have some of his lighting that he did for Viabizzuno that I sourced through Patrick Kerr. A honed piece of glass hangs in the hallway and another on the landing.

Another pair, called Lenticchia, hover over our bedside tables as reading lights. They almost look like UFOs.

Favourite designer? Irish furniture maker Alan Meredith is someone I admire. He has a studio in Co Laois and was voted Future Maker of the Year by the Design and Crafts Council of Ireland.
alanmeredith.ie

The artists you admire. I love outsider art and for me the work of American artist Jean- Michel Basquiat, who first found fame as a secretive graffiti artist Samo (Same Old Shit), is inspiring and probably the best-known of the genre.

Vik Muniz is another. He recycles materials like discarded computer parts. I’m a fan of art that discloses something about the artists.

I have a painting by Irish stencil artist Kemp, who is curating my show.

Biggest interior turn off? I don’t like to see structure that hasn’t been hidden away.

Travel destination that stands out. Key West in Florida is the place. My wife and I first went there on our honeymoon. I met Enid in our local nightclub, the End, at the age of 19 and we’ve been married 16 years.

We fell in love with the place and even bought a small apartment there, although we’ve since sold it – before Hurricane Irma struck.

It’s known as the conch republic and is full of characters straight out of a Carl Hiaasen novel.

Enid loves fishing and we’d regularly join a boat trip to spend the day catching grouper or yellowtail. Then when you get back to the dock you could take the catch to the first restaurant on the pier that you’d find and have them cook it up for you.

If you had €100,000 to spend on anything for the home, what would you buy? I’ve been saving up for a Floatation light by Ingo Maurer. I want all three sections, which will cost about €10,000. I’d also love another piece by Kemp.

Dry January is for chumps. My dry pandemic has been far tougher. Just ask my wife
6

Is this the best fish chowder in the world?
7