Helping Ireland’s old conservatories to shine in all their glory 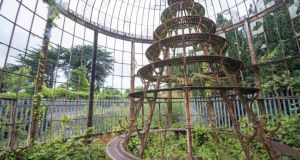 Castlebridge House stands in partial ruin in the village of Castlebridge, near Wexford town. In its former 19th-century pleasure gardens stand the ruins of one the finest rotunda conservatories in Ireland. Photograph: Brenda Fitzsimons

Most people now associate flatpacks with Ikea, but the Great Palm House in the National Botanic Gardens was shipped to Dublin in parts and assembled on site. A visit to this magnificently-restored Victorian conservatory to see the palm trees, citrus and coffee plants is an essential part of a visit to the gardens.

The Palm House in Belfast, the first curvilinear glasshouse built in these islands, is another visual treat but smaller conservatories built in the pleasure gardens of country houses in the 19th century have not fared so well. The small rotunda conservatory at Woodstock Gardens, in Kilkenny, was taken apart for scrap metal in the 1940s but a replica was built in which civil marriage ceremonies and classical music recitals are held. The conservatory in the Wexford village of Castlebridge, sadly, still awaits restoration.

Others have been moved from their original location to more prominent sites, and others still have entirely new functions. The sumptuously restored conservatory at the boutique hotel in Ballyfin, Co Laois, is a perfect reading spot.

The construction of the Crystal Palace in 1851 to house the Great Exhibition in London turned the glasshouse into sought-after item in the gardens of the wealthy.

Dublin-born Richard Turner is regarded as the supreme architect of glasshouses in Ireland and England. His Hammersmith Works in Ballsbridge, Dublin, was the centre of his enterprising endeavours for years. The fashion for ornate railings, gates and ironmongery reached its pinnacle in the curvilinear glass domes of rotunda conservatories in pleasure gardens across Europe.

Uphill, through the walled garden to the flower terraces beyond, is the conservatory at Woodstock Gardens, outside Inistioge in Co Kilkenny. The original rotunda conservatory was built in 1853-1855 for Lady Louisa Lennox in the Turner style. It was a miniature of the Great Palm House in the National Botanic Gardens with a round tiered plant stand (known as a jardinière), which rotated so the plants followed the sun.

Woodstock is renowned for its champion trees, including the longest monkey puzzle avenue in Europe, the highest Himalayan hemlock and a fine collection of conifers. (A champion tree is the tallest or oldest or most massive example of its species or kind in a given region.) Sadly, Woodstock House was burned down during the War of Independence in 1922. The original conservatory was taken apart for scrap metal while the gardens were managed by the Forestry Commission (now Coillte) in the 1940s.

All that was left of the conservatory were the remnants of granite columns, since been repaired. Metalworker Seamus Power then built a replica of the original conservatory, using a historic photograph and tiny fragments of the original glazing bars as his reference points. “People don’t believe I built it. It took about two years,” says Power. It cost more than €300,000.

Head gardener John Delaney says there are plans for afternoon teas and string quartet performances in the conservatory. It is in demand for civil marriage ceremonies. Woodstock.ie 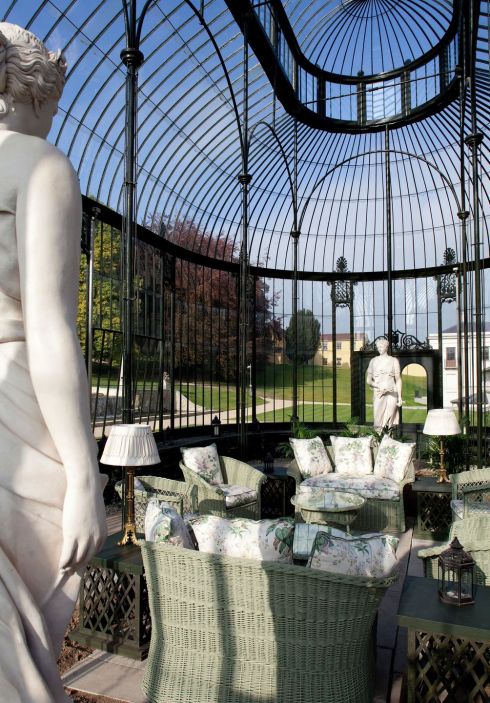 Castlebridge House stands in partial ruin in the village of Castlebridge,

near Wexford town. In its former 19th-century pleasure gardens stand the ruins of one the finest rotunda conservatories in Ireland. “The conservatory is a protected structure but it has suffered such neglect that, if immediate action is not taken, it may become unrepairable,” says Driscoll, who based his postgraduate thesis in applied building repair and conservation on this conservatory.

It has a revolving central stand for plants, which were heated by underfloor pipes. Built by James Pierce of Pierce’s Foundry of Co Wexford, in 1858, it is the only known rotunda conservatory built by the Pierces in Ireland. It was connected to the main house with a covered archway (porte cochère) under which carriages passed so their passengers could disembark without getting wet. The owners of the house, the Breen family, were wealthy grain merchants in the 1800s.

Wexford County Council bought the house and gardens in 1974 principally to build local authority housing. The council has recently been involved in the development of a community garden in the village, but the conservatory hasn’t been restored.

Conservation architect Jacqueline Donnelly said the conservatory was arguably one of the finest small conservatories in the country and a structure of national importance. Other experts, including State architect Ciarán O’Connor, have suggested it could be restored only if completely dismantled, tagged and cleaned.

Director of services at Wexford County Council Eamonn Hore says the conservatory can be saved: “It’s not forgotten about and is still on our agenda although we would need heritage funding to restore it.”

Driscoll suggests it could become part of a village park: “The idea for the Guinness Book of Records came to life in Castlebridge House, which could be a starting point for a tourism attraction here with the conservatory as a central part of that.”

The Great Palm House at the National Botanic Gardens was

designed by Richard Turner and built in Paisley, Scotland. The component parts were shipped to Dublin and reassembled on site in 1884.

The Victorian flatpack greenhouse now stands 65ft high, 80ft wide and 100ft long. Its design features of curved glass and cast-iron glazing bars are in the same style as the Palm House in Belfast Botanic Gardens (1839) and Kew Gardens (1844-1848).

It was refurbished by the Office of Public Works two years at a cost of €3 million and reopened in 2004. During the process, the entire glasshouse was tagged (more than 7,000 pieces), dismantled and removed from the site for restoration. New parts were made from recycled wrought and cast-iron to replace corroded materials.

The Great Palm House houses a rainforest exhibition with hundreds of palms, cycads, bamboos and other tropical species. Botanicgardens.ie

A beautiful rotunda Victorian conservatory forms the centrepiece of the Talbot Botanic Gardens at Malahide Castle. The 100-year-old glasshouse was acquired by Fingal County Council during recent restoration works on the gardens. It is believed to have been originally part of a convent garden in Killiney, Co Dublin. It is open to visitors to Malahide Castle. Meanwhile, the timber-framed conservatory at nearby Ardgillan demesne is under restoration, using historic joinery methods. Restoration work has required complete dismantling of the glasshouse, due to be reinstalled at Ardgillan in September/October 2016. Malahidecastleandgardens.ie

The conservatory at Ballyfin was restored as part of the sumptuous restoration work when this Regency mansion became an exquisite small hotel a few years ago. Now a light-filled retreat from the library (with a secret door concealed in the bookcase), it was originally meant for tropical plants. Designed by Turner in 1855, this curvilinear conservatory still has the heating pipes required to keep the plants warm, asystem that was still in use until the 1920s. Ballyfin.com

Easy soda bread for the ultimate cheese on toast
5