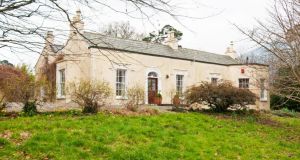 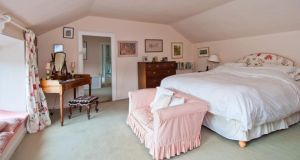 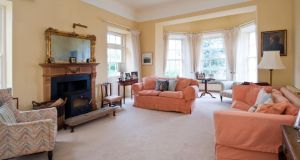 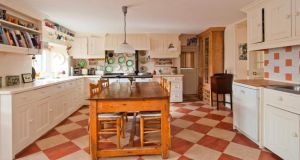 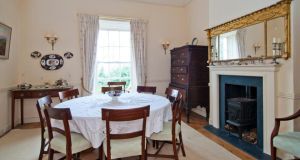 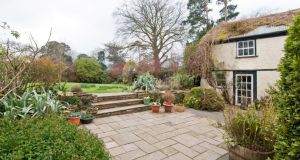 Could this be the perfect country house? Built in the 1850s as a shooting lodge for the Powerscourt Estate, Hillside sits between the two Sugarloaf mountains, with views to die for on all sides. High stone walls enclose an acre and a half of gardens, with a well, a stream and a run of ponds; there are mature trees, a riot of roses in summer, and swathes of daffodils at this time of year. Inside, the thick stone walls create deep window recesses, and it’s the kind of house that happens on all sorts of levels, with steps up to some rooms, and down to others.

There is a formal sitting room, full of original features, with high bay windows at one end, plus a separate dining room. Then it’s down stone steps to a cosy family room, and a kitchen, warmed by an Aga, that is so charming that a Kerrygold advert (made for German TV) was filmed there. A sunroom off the kitchen opens the house up to a patio, leading out on to sweeping lawns, with a vegetable garden to one side.

There is also a large two-storey cut-stone barn, which can be accessed from the patio, as well as via a utility/bootroom in the house.

German butter fans or not, it’s hard to imagine anyone not falling in love with Hillside, which is for sale through Sherry FitzGerald for €995,000. It’s also a house with a history. At one stage it was a priest’s house, and according to the present owners, the downstairs loo used to be a confessional.

There are four bedrooms, three of them ensuite. Two are downstairs, and the master bedroom, reached via a gallery upstairs, has an ensuite, a dressing room, and a small passageway to a further room, currently in use as a study, but which would make an ideal nursery.

A young family could grow up here, and never want to leave.

A short walk takes you to Avoca, where the Fern Room restaurant is open in the evenings over the weekend. And did I mention the views? Oh, those views . . .

Good news: a great tale of community support and five more things that made us happy today
6