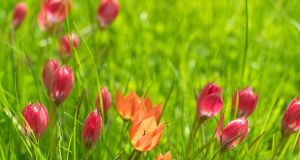 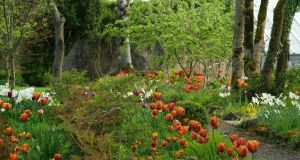 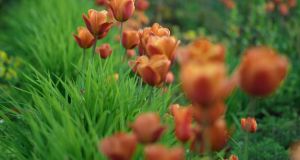 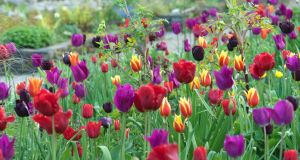 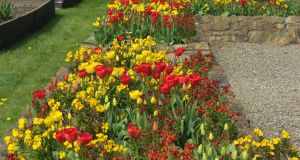 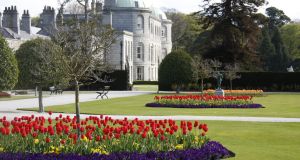 Is there a flower more beautiful than the tulip? Certainly I can’t think of any other spring bloom that combines such opulence with such elegance, such oomph with such grace. Add to that its long-flowering season as well as its astonishing versatility, not only in terms of the vast range of colours, flower shapes and heights available to gardeners, but also in terms of the tulip’s ability to look completely at home in such a variety of settings.

Take, for example, the daintier species-types, such as the candy-striped T. clusiana Lady Jane, gold-and-red T. clusiana var. chrysantha, yellow T. batalinii, scarlet T. sprengeri and ruby-red T. linifolia. These fit in perfectly in a meadow setting or orchard, or even a stretch of unmown grass. Compare these to the elaborately ornate parrot or double-types such as Black Parrot and Angelique, which look right at home in the smartest of smart city gardens and the most chic of containers.

Then consider the more traditional, large-flowered Darwin tulips such as Appeldoorn, which are a quintessential element of more laid-back cottage gardens. Here they are often paired with spring-flowering bedding plants such as scented wallflowers and forget-me-nots, which provide the perfect foil for their statuesque blooms.

At this time of year, tulips also do a fine job of filling in the spring gaps temporarily left behind by summer-flowering herbaceous perennials such as peonies, phlox, thalictrum, irises, hemerocallis, achillea and anthemis, all plants that spend the winter in hibernation.

Take a close look at the flowerbeds or borders of the cleverest gardeners. You will notice that those same herbaceous plants’ emerging foliage is used to provide a wonderful foil to the tulip’s stately flowers, whether that’s the russet-red shoots of peony foliage providing a dramatic leafy counterpoint to orange-flowering tulips such as Ballerina or Prinses Irene, or the emerging, silver-grey leaves of summer-flowering anthemis offering a romantic backdrop to tulip varieties in pale shades of pink and ivory.

Tulips also combine beautifully with other spring-flowering bulbs including fritillaries, grape hyacinths and the tall starry spikes of camassia, as well as with the flowers and fresh foliage of hardy, spring-flowering perennials such as hellebore, primula, pulmonaria, euphorbia and navelwort.

Admittedly, not all varieties are reliably perennial but you can greatly increase the chances of their being so by burying the bulbs deeply (15-20cm) at planting time, making sure to give them a fertile, well-drained soil in a sheltered, sunny spot, and sprinkling some organic granular fertiliser on the soil around the base of the plants in late spring as they begin to die back after flowering.

Yet another boon is the fact that the tulip flower’s colourful petals are edible, so they can be added to a spring salad or used to make a pretty ice bowl in which to serve a homemade ice-cream. Finally, if you love the idea of growing your own cut flowers, then few seasonal blooms are more suitable for the job than the tulip, as proven by the glorious floral still-life paintings of 17th-century artists such as Rachel Ruysch and Jacob van Huysum as well as the work of contemporary floral designers such as Sarah Winward.

If all this doesn’t convince you to grow these flowers in your own garden, a visit to one or two of the great Irish gardens throwing their doors open to the public this month in celebration of this most lovely of spring blooms surely will. That list includes June Blake’s garden near Blessington in west Wicklow, whose “A Month of Tulips” festival kicked off yesterday and continues until May 14th, with guided tours of the garden each Sunday.

In Camolin, Co Wexford, well-known Irish gardeners Frances and Iain MacDonald of The Bay Garden are building on the success of last year’s inaugural event with their second annual “Mr Middleton’s Tulip Extravaganza”, which includes a series of talks on how to get the best out of these spring-flowering bulbs (Saturdays, April 15th, 22nd and 29th, May 6th and 13th, and Sundays, April 16th, 23rd and 30th, May 7th and 14th).

If you want to add spring interest to a wall or pergola, then it’s well worth planting one or two of the early-flowering varieties of the decorative climber, Clematis alpina, examples of which include the classic C. Frances Rivis whose dainty, lavender-blue, bell-shaped flowers appear in abundance at this time of year. This relatively compact, hardy, reliable climbing plant reaches an eventual height and spread of 3mx2m and is happy to scramble up the branches of a climbing rose or wall-trained shrub. Now’s a good time to plant it, making sure to give it a moist but well-draining fertile soil and a spot in either light shade or full sun.

Seed of heat-loving vegetable crops such as pumpkins, courgettes, cucumber, squash, sweet-corn and French beans can be sown now into pots/cell trays with gentle heat and under cover to transplant into their final position in late spring.  Many of these vegetables do best when grown under cover of a polytunnel but will also crop outdoors when given a sunny, protected spot in a warm and sheltered garden.

Continue to take careful precautions against slugs, which can decimate young seedlings or emerging stems, foliage and even flowers at this time of year. Try to avoid using conventional pellets containing Metaldehyde, a chemical that’s highly toxic to earthworms, birds, pets and hedgehogs as well as to slugs. A far better alternative is the use of organically approved pellets, which contain iron phosphate and are safe to use around pets and garden wildlife. Other organically acceptable controls include handpicking/cutting with a scissors, and using specially-bred nematodes (nemaslug.co.uk), available to order from mrmiddleton.com.

Saturday, April 29th (11am-4pm), Altamont Walled Garden, Tullow, Co Carlow: A Walk on the Shady Side, a celebration of all things shady with rare and unusual plant sales by specialist nurseries and a series of talks by Mary O’Brien of Heritage Bulbs, Mary Keenan of Gash Gardens and Hester Forde of Coosheen Gardens. Admission is €25, including refreshments. Tickets available from sales@altamontplants.com/telephone Robert Miller at 087-9822135.

‘Childbirth can’t be postponed’ – how Holles Street is coping
9