The allure of growing pom poms, spiders, spoons and quills

With chrysanthemums, it’s best to start with the easy ones, and then work your way up to the showstoppers 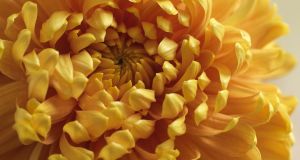 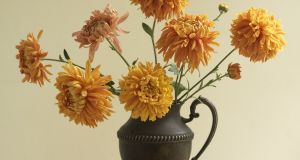 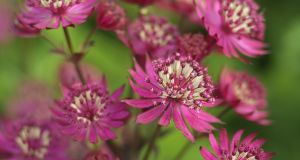 Astrantia ‘Ruby Wedding’: a perennial that can be divided in autumn. Photograph: Richard Johnston 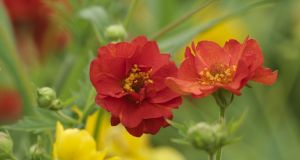 Geum ‘Lady Stratheden’ and ‘Mrs Bradshaw’ are perennials that can be divided in autumn. Photograph: Richard Johnston

I’ve often admired their shaggy, autumn blooms in still life paintings by artists such as Renoir, Matisse and Mondrian. And I’ve looked at blurry photographs of the plants growing in my grandfather’s Dublin garden, listening while my mother told the story of how he’d tried to sell fat bunches of their giant, jewel-coloured flowers one long-ago Christmas as a way of making a bit of extra cash, only to be defeated by the economic hardship of the 1940s and a world that had no money for such luxuries.

But I’d never actually grown chrysanthemums – by which I mean the proper, heavy headed, florists’ type – myself up until this year.

The first obstacle I had to overcome was getting my hands on the plants. Chrysanthemums are one of those flowers that are so long out of fashion that only a handful of specialist growers and suppliers have survived.

Having tried and failed to find an Irish one, I searched online, which is how I finally came across the website of Cheshire-based Chrysanthemums Direct, an old-style family-owned business that has specialised in growing these autumn blooms for more than 50 years.

Chrysanthemums, I soon discovered, come in a bewildering variety of colours and flower sizes including pompons, spiders, spoons and quills. Depending on the variety and the planting time, these sun-loving, half-hardy perennial plants can be in flower any time from September right up until late December (but as regards the latter, only if grown in an unheated glasshouse).

Proper chrysanthemum growers – as in those growing for competitive exhibition– take the business of producing those gorgeous flowers deadly seriously, to the extent of following a complicated schedule of feeding and disbudding, and using specially designed, inflatable bloom bags to protect the blossoms from being disfigured by insect attack.

But for chrysanthemum novices such as myself, it is recommended that you start with the easiest, least demanding, and earliest-flowering varieties. This includes what are known as the Misty and Allouise series – good all-rounders with large, but weather-resistant blooms that come in shades of gold, bronze, salmon, pink, purple, red and cream. And so I duly ordered a selection as plug plants (small, rooted cuttings), which arrived in pristine condition one squally March day via Parcelmotel (the company doesn’t deliver to ROI addresses).

Once unpacked from their protective plastic shells, you have to quickly pot these young rooted cuttings on, place them somewhere bright and frost free, and then remember to nip out the growing tips in much the same way that you would with young dahlia plants.

By early summer, mine were hardened off and ready to be planted out into the garden. Again, just like dahlias, chrysanthemums require a sunny spot and a fertile, well drained soil to flourish.

If I’d been minding my horticultural Ps and Qs, I would have taken extra care to ensure that my plants were very well staked to protect them from strong winds. But I didn’t, and so it took a couple of summer gales to teach me that their brittle stems will quickly snap in a stiff breeze.

I should have also made sure to continue to disbud them (removing the side shoots/secondary flower buds to promote the growth of long, strong stems and extra large flowers), but again, I forgot. Even so, the plants surprised me by beginning to produce their wonderful, blowsy blooms in September.

Now that the weather is turning cooler, I’ll have to bring them indoors under cover of the greenhouse. If I’d had the wit to grow them in large pots sunk into the ground outdoors, it would be a simple enough process of lifting and shifting them so that they could continue to bloom under cover for many more weeks.

Alternatively, for chrysanthemum flowers like those my grandfather once grew, I could have planted young plants into pots in the glasshouse in early September to grow on under cover, including later flowering varieties such as the Cassandra or Balcombe series.

But these are all lessons learned and hoarded for next year. For now, my garden-grown plants must be moved indoors simply to prevent them from being killed by a harsh frost, or just the grey wetness of a typical Irish winter. After they’ve finished flowering, they’ll need to be cut back to a height of about eight to 10 centimetres.

Placed on a shallow tray with their roots lightly covered in compost, carefully labelled, left unwatered and stored somewhere cool but frost free, they should begin to show signs of new growth early next spring, at which point they’ll need to be potted on again and lightly watered.

If I want to propagate new chrysanthemum plants, then February/March is the best time to take cuttings from my overwintered plants. These will root magically quickly. And so that wonderful cycle of growth will begin once again…

• Autumn-sown sweet pea plants are much earlier to flower, longer flowering and more vigorous than their spring-sown equivalents, so purchase/order seed now to sow this month. Sweet pea seed is available from most good Irish garden centres, while specialist online suppliers include owlacreseeds.co.uk. Remember that freshly-sown seed is very vulnerable to attack by mice, so take suitable precautions, including covering seed trays with a fine-gauge netting.

• October is a good time to lift and divide perennial flowering plants that have outgrown their allotted space or become woody in the middle. Use a garden fork or spade to lift the parent plant and then place it on plastic sheeting to divide it into sections, making sure to leave sufficient roots attached to each portion. Very woody root systems are best divided using a small saw or sharp kitchen knife. Transplant or pot on each section immediately after dividing and water well to allow the new divisions to establish themselves as quickly as possible.

• As night-time temperatures continue to fall and frost threatens, it’s time to move tender plants such as standard fuchsias, argyranthemums, brugmansia, Plectranthus and pelargoniums back under cover of the glasshouse or conservatory or sunny porch to overwinter. For extra protection on very frosty nights, it’s also worth throwing some horticultural fleece over them.

Tomorrow, Sunday, October 9th: Gardens of Ireland, a group exhibition of botanical art by 25 of Ireland’s leading artists will open at Tourin House, Cappoquin, Co Waterford, the family home of the Jameson family, including well-known gardener Andrea Jameson and her sister, the botanical artist Tara Jameson. See tourin_house.ie for details.