A great horticultural legacy of some of the world’s rarest species is flowering at the OPW-managed garden in Kilmacurragh, Co Wicklow 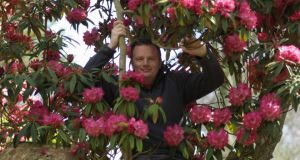 Seamus O’Brien, head gardener of Kilmacurragh surrounded by the flowers of the tree rhododendron, R.arboreum ssp. cinnamomeum, which is in full bloom in the gardens at the moment. Photograph: Richard Johnson

An awfully long time – roughly 140 years – has passed since the famous Broad Walk of Kilmacurragh in Co Wicklow was first laid out by siblings Thomas and Janet Acton, two great Irish gardeners of the Victorian era whose joint legacy was the creation of one of the finest private plant collections in this country. To give some sort of historical perspective, in the same decade that the Actons were busily planting out the broad walk’s young specimens of Rhododendron Altaclerense, Parnell was elected to the House of Commons, Thomas Hardy anonymously published his second novel Under the Greenwood Tree , while the ghostly brigantine Marie Celeste set sail for Gibraltar, only to be discovered months later unmanned and abandoned.

Fast-forward to the second decade of the 21st-century and Kilmacurragh House is a roofless ruin whose remains are home to a family of noisy rooks, while those slender-waisted young Irish yews clearly visible in a 19th-century sketch of Kilmacurragh’s broad walk are now venerable specimens with bulging branches. As for the young rhododendrons that the Actons planted alongside them, they’ve grown into 15m giants with mottled, sinuous trunks and spreading leaf canopies that erupt into a blaze of crimson flower each spring. This year they’re several weeks later than usual, a rare May display that’s a result of the cold spring.

Along with the many unusual southern hemisphere conifers and choice woodlanders that flourish in this OPW-managed Wicklow garden, their almost fantastical size and vigour are a result of Kilmacurragh’s typically mild, moist climate and its acidic deep brown earth. Remarkably, most of its oldest specimens come directly from plant material collected in the wild by some of the greatest botanists, plant hunters and adventurers of the 19th and early 20th centuries, including Sir Joseph Hooker, William Lobb, Ernest Wilson, George Forrest, Frank Kingdon Ward, Theodore Hartwig and Pere Delevay.

As to the question of how the Actons laid their hands on these rare plants, much of the answer lies in their lifelong friendships with the then-director of the National Botanic Gardens, Dr David Moore, as well as his son and successor Sir Frederick Moore, both of whom acted as garden advisers and supplied a wealth of wild-sourced material. One example is Kilmacurragh’s many specimens of Rhododendron arboreum sub-species cinnamomeum, whose brilliant pink flowers are right now lighting up the gardens. Grown from material collected in the wild by Sir Joseph Hooker in India and which came to Glasnevin via Kew, they were raised as seedlings in the glasshouses of the National Botanic Gardens in the 1850s before finally making their way to Kilmacurragh.

Other plants were purchased by Tom Acton from Veitch’s, the distinguished nursery that sponsored so many of the great Victorian plant hunters’ pioneering expeditions to South and Central America, China, India, Japan, South Africa and Australia.

Just as it was for the Actons, the art and science of plant hunting has also long been a source of fascination for Kilmacurragh’s gifted head gardener, Wicklow-born Seamus O’Brien. Inspired by the intrepid Irish plant hunter Augustine Henry and the British-born Sir Joseph Hooker, O’Brien has made expeditions to China, Taiwan, the Indian state of Sikkim, Australia, New Zealand and Tasmania. Some of his earliest trips, in which O’Brien followed the routes outlined in Henry’s original hand-drawn maps, notebooks and diaries, subsequently became the subject of his recent award-winning book, In the Footsteps of Augustine Henry . Later trips form the basis of his next, provisionally titled In the Footsteps of Sir Joseph Hooker .

O’Brien has also collected seeds of many different plants on his travels, with the gardens of Kilmacuragh becoming one of the greatest beneficiaries. Much of its 52 acres is now divided in “phytogeographical zones” that he’s in the process of replanting with wild-origin material, including plants supplied by other botanic gardens across the world. Young specimen trees and shrubs are everywhere, some species so endangered that they now only exist in the wild in tiny numbers. Even the garden’s 45m double border is filled with exceptional plants including fleshily statuesque specimens of the rare mountain cabbage tree, Cordyline indivisa, and the Himalayan lily, Cardiocrinum giganteum (raised from seed), which reach a quite extraordinary size here. Ever the plant historian, O’Brien has also found space for many Irish-named cultivars, including the shade-loving Anemone nemorosa Robinsoniana, named after the great Irish gardener William Robinson.

Try to pay this remarkable Irish garden a visit in the next few weeks, not only to enjoy the flowering of a great horticultural legacy, but also to celebrate another in the making. Admission is free.