Reasons to be cheerful in the garden: Snowdrops are in 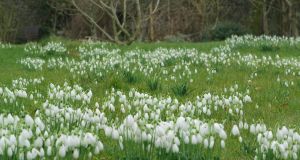 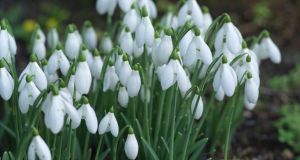 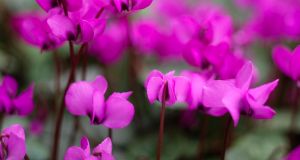 Cyclamen coum, a star of the early spring garden, which flowers from late January until March. Photograph: Richard Johnston

I’ve never quite decided which side of the fence I stand on when it comes to snowdrops. On the one hand, I’m by no means a galanthophile, a person utterly enthralled by the subtlest of differences between the snowdrop’s dainty, ghostly flowers, whether it’s the markings on the inner petals, or the colour or size of the ovary, or the shape and length of the wire-thin ‘pedicel’ that joins the flower to the stem. On the other, I do treasure the stories of how the many different kinds of snowdrops came to be cultivated in our gardens, especially the Irish varieties.

An example is Galanthus ‘Drummond’s Giant’, discovered by Carlow gardener Stasia O’ Neill and named after the local agricultural supplies shop where she first found it for sale. Another is ‘Kildare’, discovered by chance by eagle-eyed British snowdrop enthusiasts, Ruby and David Baker, after they lost their way while navigating the county’s notoriously confusing rural back roads. Also harking from Kildare is the famous Irish snowdrop known as ‘Straffan’, which arrived in Ireland as a bulb stowed away in the luggage of Major-General Eyre Challoner Henry Massey as he returned home from the bloody battlefields of the Crimean War. Meanwhile, it was a Tipperary garden that gave us the prettily-ruffled, late-flowering double snowdrop known as Galanthus ‘Hill Poe’, and a Galway garden (belonging to the Mahon estate) in which the esteemed Irish horticulturist, the late Dr Keith Lamb, discovered the very early-flowering variety known as Galanthus ‘Castlegar’.

February, of course, is peak snowdrop season in Ireland, so if you fancy the idea of seeing these heritage Irish snowdrops in the flesh, then why not pay a visit to some of the excellent Irish gardens with notable collections? One of the best-known, of course, is OPW-managed Altamont in Co Carlow, home to well over 200 different kinds of snowdrops which grow throughout this romantic 40-acre country garden (heritageireland.ie). Its collection was begun by its former owner, the late Corona North, and is now in the very capable hands of head gardener Paul Cutler. Altamont’s annual ‘Snowdrop Week’ takes place this year from February 12th-18th, with daily guided tours by Cutler at 2pm (carlowtourism.com). Its charming walled garden, where Robert Miller runs an excellent plant nursery/ garden-centre (he stocks a fantastic range of snowdrops), is also home to an outstanding collection of galanthus, including many rare Irish varieties.

Altamont is just one of a growing number of Irish gardens throwing their doors open to the public in the coming weeks to celebrate the special beauty of the 2018 snowdrop season. Others include the charming Bellefield, near Shinrone in Co Offaly, home of garden designer and galanthophile Angela Jupe, whose book The Story of Irish Snowdrops is due to be published later this year by Nicholson Bass. Bellefield opens to the public from today (Saturday, January 27th) until February 14th, 11am-5pm, angelajupe.ie.

Co Cork is also home to some outstanding private snowdrop collections, including that of nurserywoman Hester Forde, one of the organisers of the annual Snowdrop Gala being held next Saturday, February 3rd, in Ballykealey Manor Hotel, Carlow.

Forde’s outstanding small garden at Glounthane, Coosheen, which features in the upcoming February issue of Gardens Illustrated, opens to the public on Saturday, February 10th, and Sunday, February 11th (11am-3pm) in aid of the charity Irish Pilgrimage Trust (hesterforde@gmail.com).

Also in Cork is Blarney Castle, one of the country’s best-known gardens. Now in the expert hands of head gardener Adam Whitbourn, its imposing front avenue is filled with a sea of snowdrops (the native species, Galanthus nivalis) while the garden’s new winter borders are in the process of being planted with a collection of heritage Irish snowdrops intermingled with hellebores, winter aconites and drifts of cornus and rubus (blarneycastle.ie, open 9am-5pm during February).

Over in Galway, the lovely Woodville Walled Garden in Kilchreest is another place to see Irish snowdrops in bloom as well as a host of other spring-flowering bulbs. Re-opening to the public from next Thursday (February 1st), visitors can enjoy a guided tour of the gardens every weekend (Friday-Sunday, 2pm) during the month of February. Woodville Walled Garden is also hosting a talk ‘Snowdrops and Spring Bulbs; The Bad, the Good and the Indifferent’ by the young Irish galanthophile and plant-hunter Paul Smyth on February 10th (2pm, woodvillewalledgarden.com).

Near Athy in Co Kildare you’ll find vast swathes of naturalised snowdrops flowering in Burtown’s centuries-old gardens and woodlands as well as a more recent collection of 60 named varieties. This large and atmospheric country garden opens specially for the snowdrop season from February 13th-28th (Wednesday to Sunday, 10.30am-4.30pm, burtownhouse.ie).

Even closer to Dublin is the charming Primrose Hill in Lucan, home to one of the country’s largest and oldest snowdrop collections. Begun by the passionate galanthophile, the late Cicely Hall (the variety Galanthus ‘Cicely Hall’ is named after her), it’s now tended by her son Robin Hall (open throughout February, 2pm-6pm, contact gayoneillart@eircom.net).

Finally, for galanthophiles in the north of the country, consider paying a visit to Ballyrobert Nursery in Ballyclare, Co Antrim. Home to more than 150 different kinds of snowdrops, it’s hosting a series of Snowdrop Days on Sunday, February 11th; Saturday, February 17th; and Sunday, February 18th (2pm- 4.30pm) with two tours of its snowdrop collection (2pm, 3.15pm) on each of these dates (booking advised, email bookings@ballyrobertgardens.com).

(For further information on Irish snowdrops, see irishsnowdrops.org and irishgardenplantsociety.com)

If you’ve some space going a-begging in your polytunnel, then consider chitting some first-early varieties of seed potatoes indoors in a cool, bright space for planting out under cover from mid-February. Once planted, you’ll need to keep some horticultural fleece at hand to protect the emerging foliage from frost on any particularly chilly nights but the bonus will be a very early crop of your own delicious, homegrown potatoes, ready for harvesting in late spring/ early summer.

Speaking of polytunnels, remember that weed growth begins much earlier in the year in these protected growing spaces than it does outside. So start keeping a watchful eye out for any just-germinated weed seedlings and either hand-weed them or use a hoe to slice them away. Organic mulches are another effective way to suppress weed growth, as long as you’ve ensured the mulch itself doesn’t contain a hidden stash of weed seeds (this can sometimes be a problem with some farmyard manures and homemade composts). Slugs also become active in polytunnels and glasshouses at this time of year, so take appropriate precautions.

Another star of the early spring garden is the lovely Cyclamen coum, a dainty woodlander with pretty pink or white flowers that appear above its tightly clustered foliage from late January until March. Given a fertile, humus-rich and well-drained soil beneath the light shade of deciduous trees or shrubs, it will happily naturalise over time. Potted specimens are widely available at this time of year in most good Irish garden centres.