Nine things to do in the garden in April 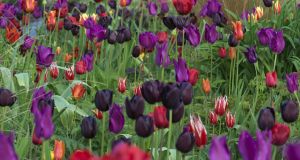 June Blake’s garden near Blessington, West Wicklow, will also be celebrating its “Month of Tulips” throughout April with a spectacular display of these spring-flowering bulbs.

Canny gardeners will know that one of the most important milestones of the Irish growing year is the vernal equinox, which this year fell on March 20th, marking the beginning of spring proper. It’s not just its symbolic significance that we treasure but also its very measurable effect on plant growth.

As the balance finally swings in favour of warmth and daylight hours (an average increase of more than four minutes every day until the summer solstice in late June), our gardens burst into life. Seeds begin to germinate, flower-buds open, dormant shoots to rapidly grow, hibernating wildlife to waken, all triggered by the orbit of the earth around the sun.

Just like our gardens, we gardeners also burst into life at this time of year, our minds filled with excitement for the season ahead, our fingers itching to get in the soil. Here’s a host of ideas to get you going.

Plant some organically-produced seeds… April is one of the very best times of the year to sow seed of a vast range of ornamental and edible species, especially if you can give the seedlings some under-cover protection (a bright windowsill, cold frame, glasshouse or polytunnel) before transplanting them outdoors towards the end of next month when the threat of late frost passes in most parts of the country.

If it’s flower power that floats your boat, you can’t go wrong with hardy and half-hardy annuals such as tagetes, cosmos, rudbeckia, cerinthe, nasturtiums and pot marigolds, as well as longer-lived perennials such as achillea and Verbena bonariensis .

Bear in mind that by buying organically-produced seed, you can be certain that it hasn’t been pre-treated with a battery of nasty chemicals. Better again if the seed has been produced in Ireland, as this will produce plants adapted to our variable climate. Recommended organic Irish seed producers suppliers include Cork-based brownenvelopeseeds.com and Clare-based irishseedsavers.ie.

Get your soil going. Take a valuable lesson from last year’s punishing drought and do everything you can to ensure that the soil in your garden or allotment is summer-ready.

Adding generous quantities of a mulch rich in organic matter such as well-rotted manure or homemade garden compost (see last week’s column for other suitable alternatives including Enrich, Gee-Up and Enviro Grind) will do a lot to help your garden successfully weather periods of extreme heat and lack of rainfall without getting stressed and unhappy (the plants, not you).

So will the addition of generous sprinkles of powdered seaweed dust or seaweed meal, which will also increase the soil’s water-holding capacity as well as plants’ resilience to drought damage.

Already tired of cutting your lawn? Reducing the size of the area that you keep tightly mowed will save you hours of repetitive work and expensive fuel as well as being far kinder to the planet.

Allowing a portion of it to grow longer (just mow paths through it for easy access) will also provide valuable habitats for our fast vanishing wildlife. So will introducing the native wildflower known as yellow rattle, although you’ll need to wait until autumn to sow its seed (see plantlife.org.uk for detailed instructions on how to sow or grow it).

Once established, this remarkable native plant will steadily encourage the growth of a far greater diversity of native wildflowers and grasses, while simultaneously discouraging the rampant growth of thuggish species such as the invasive perennial grass known as Yorkshire Fog.

But if traditional lawns are more your thing, then April is also a great time to make minor repairs to winter-damaged swards by raking or scarifying it, using a garden fork or mechanical aerator to aerate it and then covering any bare patches with a generous top-dressing of John Innes compost followed by a generous sprinkle of fresh lawn seed.

But avoid using environmentally harmful weed and moss killers on it for the sake of your own health as well as the planet’s. Plus who doesn’t love a lawn filled with daisies…

Harvest the rain. No more procrastinating: it’s time, if you haven’t done so already, to install a water barrel to harvest rainwater. Or even a couple of water barrels. Yes, I know it’s not the most “fun” of gardening jobs, but – and yes, I’m afraid that I am going to say it again- just remember last summer’s drought…

Plant dahlias. Very few summer-flowering plants can compete with dahlias for their huge range of colourful blooms and impressively long season of interest (from July until the first harsh frost) while the single-flowering types such as “Moonfire” , “Bishop of York” and “Annika” are perfect for attracting pollinators.

Not only that, both the dahlia’s flowers and tubers are also edible, making it one of the great all-rounders in the garden. At this time of year you can buy dahlias as young plants, grow them from seed (sow under cover with generous bottom heat for transplanting into their final positions in early summer, stockists include avonbulbs.co.uk and seedaholic.com) or as fleshy underground tubers.

Widely available from most good garden centres or to pre-order online from specialist suppliers such as mrmiddleton.com, the tubers can be potted up and grown on under cover for transplanting out in early summer or planted directly into the ground this month in milder gardens.

Just make sure to give them a rich, moisture-retentive but free-draining soil in full sun (very similar growing conditions to potatoes, their South American tuberous cousins) and to take careful precautions against slugs, which delight in eating the plants’ succulent young shoots as they emerge.

Be inspired April is a marvellous month for plant fairs, garden talks and workshops. Examples include Saturday’s Irish Specialist Nursery Association’s plant fairs at Airfield Estate, Dundrum, Co Dublin (9.30am-5pm) and at Farmleigh Estate in the Phoenix Park on April 21st and 22nd (see irishspecialistnurseriesassociation.com), where you’ll find a huge and lovely range of choice, Irish-grown plants for sale.

In Carlow, Altamont Plants is hosting its “Spring Beauties” workshop on April 27th (11am-1pm) with guest speakers including well-known gardeners June Blake and Carl Wright of Caher Bridge Gardens in Co Clare. June Blake’s garden near Blessington, west Wicklow, will also be celebrating its “Month of Tulips” throughout April with a spectacular display of these spring-flowering bulbs (juneblake.ie).

On Saturday (noon), gardener, author and Guardian gardening columnist Alys Fowler is giving a talk, “Herbs, Folklore & Health”, at the magnificent Killruddery Gardens in Co Wicklow, while I’ll also be there the following week (Sunday April 14th) to give a hands-on, one-day workshop on how to create your very own organic cut-flower garden  (pre-booking essential, see killruddery.com.

Declutter. You know that ugly shrub/storm-damaged tree/diseased rose bush that’s been growing in your garden for God knows how long and which you’ve been forever vowing to get rid of? That broken garden pot you keep meaning to bin? That rusty bench you promised many moons ago to donate to a friend? To paraphrase the great Arnie, “Do it. Just do it…”

Give tatty garden furniture a spring make-over by using a power-washer or a scrubbing brush to wash off dirt, moss and algae. To give wooden furniture, garden fencing and decking a new lease of life, cover them with a couple of fresh coats of exterior wood paint or wood stain from the Arborcoat range by American paint brand Benjamin Moore, which is known for its high-quality, colour-durable qualities.

Finally: let this be the year that you ditch supermarket herbs for your own home grown ones. Instead find room for a couple of generous-sized window-boxes or large pots, one of which you’ll need to place in a bright, sunny, sheltered spot outdoors for sun-loving herbs such as prostrate rosemary and oregano, while the other should go in a cooler, lightly shaded spot for herbs such as parsley, mint, coriander, chervil and sweet woodruff.

Use a good quality John Innes-based compost and add a few generous handfuls of horticultural grit to the mix you use for the sun-loving kinds, which really appreciate sharp drainage.

If you don’t have space in the ground, then taller herbs such as fennel, dill, lovage and lemon verbena can also be grown in containers as long as they’re large and deep. Sun-loving thyme is also happiest growing alone outdoors in its own small pot while in our cool Irish climate, heat-loving basil needs to be grown indoors or under cover in constant warmth and bright light.