Gardens: Waiting for that welcome frost 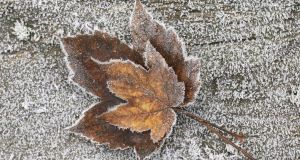 You don’t expect to see roses blooming in Ireland in the depths of winter. Or marigolds, pelargoniums, agapanthus, tree mallows, campanulas, hybrid clematis, daffodils and primroses for that matter. And yet in the last few weeks, as one of the oddest gardening years that I can remember finally stormed its way to a wet and windy end, I’ve seen every one of these in flower.

The cause of such unseasonable displays was, of course, the remarkably mild weather of late autumn and early winter. Records for Met Éireann’s regional weather stations show that mean temperatures for December 2015 were in some cases more than three degrees above average. The result was that many summer/autumn-flowering plants whose blooming period had been delayed or curtailed by the unusually cold spring and summer took full advantage of those exceptionally benign temperatures to flower their little hearts out. Meanwhile, other temperature-sensitive plants were duped into thinking that spring had arrived.

As gardeners, we mark the year’s slow turning by the sight of the first snowdrop, the first tulip, the first rose, the first (and last) ripe tomato, that final brave dahlia. So when you look out on a winter garden hoping to see a tree’s bare branches silvered in frost, only to be confronted by the eerie sight of a rose breaking into fat bud, it’s worrying.

The question preoccupying the minds of many Irish gardeners of late is how those unseasonably mild temperatures will affect our plants, as well as the rich variety of garden wildlife that depends on the timed emergence of particular host plants and nectar/pollen-rich flowers for its survival.

The answer? Well, there’s some small consolation to be had in the fact that such unseasonably mild winter temperatures are not entirely without precedent. In December 1948, for example, many counties recorded temperatures in the mid to high teens. It’s also worth bearing in mind that the sustained mild temperatures of recent months are similar to the balmy winter temperatures typically enjoyed by those who garden along the mild coastal edges of the west, south and south-west.

That said, it’s reasonable to expect a period of chilly wintry weather to arrive sometime soon in the traditionally cooler parts of this wet and windy island of ours. Yes, the subsequent plunge in temperatures will inevitably sear soft young growth, but be reassured that many plants will be just fine; they’ll simply don their winter garb and wait for spring proper to arrive.

The exception is any spring-flowering bulbs such as daffodils that may have been tricked into an unusually early display. Gardeners will have to wait until spring 2017 to see these in bloom again.

More worrying for Irish gardeners is the fact that many plants actually require a sufficient period of chilly winter weather, typically with temperatures between zero and seven degrees, in order to flower/ fruit/crop properly, a process known as “vernalisation”. These include garlic, strawberry, blackberry, raspberry, blackcurrant, pear, plum, cherry and apple trees, and many spring-flowering bulbs and perennials such as aquilegia, creeping phlox, cushion spurge, astilbe, iberis and the pasque flower. The time required can be surprisingly long; some varieties of apple, for example, require between 1,000 and 1,200 hours. Similarly, the seeds of many different species of plants require a lengthy period of chilling (a process called “stratification”) before they can successfully germinate. Will they get it? Only time will tell.

Those prolonged mild winter temperatures, especially when coupled with record rainfall amounts, will also have consequences as regards the spread of plant pests and diseases. Frosty weather, you see, is beneficial to us gardeners in terms of shortening insect pests’ breeding cycles and killing those that would otherwise overwinter to become active early the following spring. Which makes it all the more imperative to practise good garden hygiene by giving glasshouses and polytunnels (favourite winter stomping grounds for many insect pests) a good clean-down. But don’t be too tidy-minded when it comes to the wilder corners of the garden; not only are these areas often home to nesting or hibernating bees, but many “weeds” such as ivy, clover and dandelions are valuable sources of pollen and nectar for pollinating insects.

Rainy, mild winters like this one also favour the spread of water-borne plant diseases. While they are often difficult to control, one of the best preventative measures is, again, to practise good garden hygiene including routine washing-down of tools and muddy boots.

In another sign of how mild it’s been, lawns have also continued to grow, but do wait until soil conditions improve to give them a very light trim.

Finally, vigorous weed growth is yet another unwelcome consequence of the unseasonably mild weather; I’m disgruntled to see how many seedlings have appeared in my own garden in the last few months. Once soil conditions improve, I’ll be out there with a sharp hoe to prevent them getting established.

In the meantime, I’m keeping my fingers firmly crossed for some suitably seasonable, frosty winter weather.