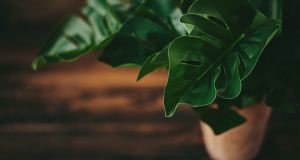 Swiss cheese plant known as Monstera deliciosa, is so obliging and undemanding that it’s almost impossible to kill it. Photograph: iStock

Cast your mind back to the fledgling months of 2020 and to the final weeks of a pre-pandemic world that now seems as unreal as a unicorn. Do you remember the very last thing that you bought? By which I mean “bought” in a proper bricks-and-mortar shop in the sort of guileless way that we all once bought things in shops, where we lingered over them, held them, ran curious fingers along their surfaces because there was absolutely no reason not to, occasionally even (how strange it seems now) pressed them close to our faces to see how they felt or smelled.

The very last thing I bought in this way was a plant pot. A simple, inexpensive, ceramic plant pot, as smooth and delicate to the touch as a duck egg, with a smoky, almost silvered glaze and three slender rope handles that allowed it to be hung from a ceiling at a height. I chose it because it was –because it still is– just the right size and shape for a favourite houseplant of mine, a handsome specimen of Senecio rowleanus commonly known as String of Pearls.

That pot - that small but poignant totem of a life before Covid- now hangs in a corner of a quiet room, its edges draped in greenery. Situated close to a large south-facing window but out of direct sunlight, the warm, bright, draught-free spot it occupies is the perfect place for my Senecio rowleanus plant. A heat-loving, light-loving, drought-tolerant succulent, its long, cascading stems are studded with a multitude of tiny, fleshy, pea-green beads so pretty and so irresistibly tactile that it’s almost impossible to resist gently stroking them as you go past. Whenever I do so, it feels oddly illicit, yet another reminder of what a strange new world we live in.

Right next to it hangs another pot in which grows yet another favourite houseplant, Ceropegia woodii. Commonly known as Rosary Vine or String of Hearts, its slender, trailing, vine-like foliage quickly forms a dangling, lacy curtain of tiny, silver-green, heart-shaped leaves, with each intertwining stem quite quickly reaching a length of two metres or more. Just like Senecio rowleanus, this highly decorative, easy-to-grow species is a native of south-west Africa and relishes the warm, bright, sheltered position that it’s been given, as does a fleshy, spiky agave (a nameless gift) that grows in a pot on the nearby windowsill.

Like the very best kinds of houseplants, all three have thrived on a regime of benign neglect, a minimal intervention approach that asks only that they be watered occasionally (less in winter, more in summer) and be given an occasional nourishing liquid feed during the growing season. In return for so little, they give me a sharp jolt of joy and pleasure each and every time I look at them, transforming my living space in a way that’s quite impossible to quantify.

There are, of course, other, much trickier types of houseplants. Demanding species which require the kinds of specific growing conditions – high humidity, regular misting and a gentle, dappled light, for example– that are so challenging or nigh-on impossible to successfully recreate for any length of time in the average family home that they inevitably start to sulk and then slowly die, all the while reproaching us for our lack of green fingers. Who hasn’t, for example killed at least one maidenhair fern (Adiantum raddiatum) in their lifetime? Or regretfully watched on as a newly-purchased or newly moved fig tree, piqued by the sudden change to its growing conditions, mournfully decides to commits its own slow version of harikiri, leaf by painful leaf, despite your very best efforts to resuscitate it.

Over the course of my lifetime, I’ve killed– or as good as killed to the point where they wished they were dead– countless African violets, assassinated numerous peace lilies (Spathiphyllum) and overseen the accidental execution of at least a dozen Boston ferns (Nephrolepis exaltata ‘Bostoniensis’). The latter, in my defence, is a diva of a houseplant, so demanding in its particular set of  requirements- it hates bright light, cold draughts or any temperature below 12C or above 24C, and insists on a growing medium that’s kept perpetually damp yet never sodden, using water that’s ideally lukewarm to the touch– that I happily conceded defeat years ago.

In almost every case the reason for these plants’ painful demise wasn’t so much a lack of care as my failure to provide them with the specific kinds of growing conditions that they needed to flourish.

This, of course, is the fence at which almost all of us house plant owners stumble at some point. We give species that love humid, shady conditions a spot in a dry, sunny, airless room. Or we place them on a window ledge right next to a radiator that’s broiling hot by day, ice-cold at night. Or we tuck plants that need heat and intense light tenderly in a shady, draughty corner. And so our plants continue to sadly die until, eureka, it finally dawns on us that the one non-negotiable rule of being a houseplant owner– perhaps the only unbreakable rule when it comes to keeping your houseplants happy– is to choose the right plant for the right place.

If it’s a warm, bright, sheltered spot out of direct sunlight, for example, then any of the plants that I’ve mentioned above will thrive. Other houseplants suitable for these kinds of growing conditions include the ponytail palm (Beaucarnea recurvata);the baby rubberplant (Peperomia obtusifolia); the Kentia palm (Howea forsteriana) and the Areca palm (Chrysalidocarpus lutescens). But if it’s an ultra-bright, sunny windowsill in direct sunlight, then go for cacti, agaves, crassulas, echeverias and other succulents such as the Panda plant (Kalanchoe tomentosa) and Aloe vera.

If it’s a shady spot, choose the kinds of easy-to-grow species that thrive in these sorts of low-light growing conditions; examples include the nattily striped spider plant (Chlorophytum ‘Variegatum’); the cast-iron plant (Aspidistra elatior); trailing philodendron (Philodendrons scandens), the snake plant (Sanesevieria trifasciata); the ZZ plant (Zamioculcas zamiifolia) and the statuesque Swiss cheese plant known as Monstera deliciosa, a houseplant so obliging and undemanding that it’s almost impossible to kill it.

Last but not least, bear in mind that some species of house plants aren’t so much demanding as they are the unfortunate victims of fleeting Instagram trends that treat them as objects devoid of life, something that always strikes me as both sad and strange when the whole point of houseplants is their magical ability to bring any space to life.

Air plants superglued to picture frames, for example. Cacti imprisoned inside humid terrariums. Or fleshy echeverias spray-painted in dayglo colours or glitter (why?) so that their fleshy leaves struggle to perform the two basic processes essential to all plants, which are photosynthesis and respiration. In this case, who could blame them for giving up the ghost . . .

For an extra-early crop of new potatoes, plant chitted seed potatoes into large pots/containers and then grow the plants on under cover of a polytunnel or glasshouse. By growing them in containers rather than directly in the ground, the plants can then be moved outdoors in late spring once the risk of frost has passed, quickly freeing up the space for other plants. Potatoes grown under cover in this way will start cropping in May.

If you sowed seed of vegetables and flowers under cover in recent weeks, then the young seedlings will be starting to appear and will need to be pricked out into trays/modules once they’ve produced their first set of true leaves. Bear in mind that young seedlings are very vulnerable to extremes of temperature, cold draughts, low light levels (this makes them weak and leggy) and direct, bright sunshine (this can sear their fragile leaves). A careful watering regime is also crucial, taking care to water very gently (in the case of very fragile seedlings it’s best to bottom-water) and to avoid overwatering as this can quickly cause problems with disease.

A successful succession at Bantry House