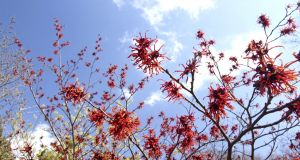 Late last week, navigating my way through the warren of narrow city streets that feed off Dublin’s Grand Canal, I caught the briefest of glimpses of the loveliest of small town gardens.

A tiny, shady plot, enclosed by iron railings and sitting immediately to the front of a Victorian red-brick terraced house, it was filled with the outstretched branches of a single witch hazel in elegant yet fiery bloom, each twisted branch covered in a profusion of spidery, rusty-red flowers.

Beneath it, close to ground level, grew what looked like a carpet of cyclamen, their mottled, heart-shaped, silvered leaves providing the perfect foil. It was a sight so beautiful, so joyful and also so utterly unexpected on a cold, grey, early spring day that if it weren’t for the fact that I glimpsed it from a passing car I would have knocked on the owner’s door to offer my congratulations.

Why is it, I wondered later to myself, that more of our gardens aren’t planted in the same way so that they lighten up the dullest, darkest, muddiest days of the year? Instead of bleak expanses of concrete, ornamental pebble or muddy lawn, or those soulless, static displays of box, box and yet more box, why don’t we use these spaces to grow the sorts of plants that lift our spirits (as well as those of passers-by) at that time of year when it’s most needed, to provide beauty (the world can always do with more of it), and to mark the turning of the seasons?

An example is the aforementioned witch hazel, a slow-growing, winter-flowering, deciduous shrub that, depending on the variety, produces its spidery, deeply-scented flowers in glowing shades of gold, ember-red and marmalade orange from winter through to early spring.

Another is its very close cousin Persian ironwood (Parrotia persica), which produces its similarly spidery, red flowers on bare branches from January-February, and also gives a glorious display of autumn colour when its foliage turns to shades of gold and russet-red. Both shrubs will grow happily in full sun or light shade if given a moist but well-drained soil.

Also intensely perfumed – so much so that on a cold still day, you can smell its scented, rose-pink flowers from several yards away – is the shrub known as Daphne bholua “Jacqueline Postill”. Just like Persian ironwood and witch hazel, it’s a very slow-growing, late winter/early spring-flowering shrub (January-April) but more upright in habit, eventually reaching a height and spread of 2-3m x 1m.

Semi-evergreen in milder gardens, it needs a sheltered spot in a cool, fertile, moist, but well-drained soil in full sun or light shade to thrive. The reward is scented flowers that brighten up the dreariest of days, delivering a powerful punch of mood-enhancing perfume guaranteed to bring a smile to the face of even the most winter-weary gardener.

The same is true of its close but more compact relative, the evergreen Daphne odora, which flowers from January-March. If variegation is your thing, then seek out D. odora “Aureomarginata” or the even showier Daphne odora “Mae Jima”.

If it’s a combination of brightly coloured, deeply-scented winter flowers and architectural, evergreen foliage that you’re after then it’s hard to beat the shrubby mahonia genus, some varieties of which are in flower from November through to March. Examples include Mahonia x media “Winter Sun”, and M. x media “Charity”. Both slowly reach a height and spread of 4m. Give them light shade and a fertile, well-drained but moist soil with shelter from biting winter winds and they’ll be happy.

All of these woody, slow-growing specimen shrubs are perfect for under-planting with a range of low-growing, winter/early-spring flowering bulbs. Examples include snowdrops, crocuses and the aforementioned Cyclamen coum, whose dainty flowers come in shades of magenta, pale pink and white, appearing above tight clusters of heart-shaped leaves often decoratively mottled in shades of silver.

Given the right growing conditions (cool, shady, sharp-draining, tending towards the dry side in summer), this small tuberous plant will generously self-seed itself about the place over time.

Buy and plant a few potted plants now, while they are in flower, and you’ll not only get to choose your preferred colour but also greatly increase the chances of the plants establishing and self-seeding. Then add a few sprinkles of the dainty, white-flowering Narcissus “Thalia” to follow on in March-April.

Finally, a discussion of late winter/early spring flowering plants would not be complete without a mention of hellebores. My own plants (various unnamed varieties of H x hybridus) have been in flower on and off since last autumn but are beginning their proper, early spring flush of pollinator-friendly flowers now, a process that will continue until April.

Like so many of its early-flowering compatriots, this compact woodlander likes a fertile, humus-rich, moist but free-draining soil in full sun or light shade. With flowers in a multitude of shades from the palest cream to the deepest plum as well as in both single and double forms, it should be given a spot in almost every Irish garden.

Again, my advice is to buy your hellebores in bloom so that you know exactly what you’re getting. Plant them in a place where winter-weary strangers happen to pass by and you’re sure to bring a sudden, unexpected flash of joy to their flannel-grey day.

With temperatures and light levels slowly beginning to rise it’s important to keep a careful eye on glasshouse or polytunnel-grown crops as they start to need more regular watering. On very bright, sunny days it may also be necessary to provide ventilation, but do so very carefully to avoid “shocking” young plants, and always make sure to close all doors and vents in the evening when temperatures quickly start to plummet.

Now’s the time to prune varieties of clematis belonging to either Group 2 (early summer flowering, large-flowered hybrid types such as “Nelly Moser”)  and Group 3 (late summer flowering varieties of Clematis viticella and Clematis texensis and herbaceous types such as C. heracelifolia, C. integrifolia and C. recta). Those belonging to Group 2 should only be pruned lightly, back down to a pair of healthy buds on each slender stem, while those belonging to Group 3 should be hard-pruned back to 15-30cm above ground level and a healthy pair of buds. For more detailed advice see rhs.org.uk.

If you grow a lot of plants in pots, then February is a great time to check them for slug eggs. Yes, it’s yuck, but it’s well worth doing this to minimize damage later in the year.

Start by gently tipping the root-ball out of the container and inspecting both the surface of the roots and the container itself for any clusters of tiny, grey-white eggs. In the case of herbaceous plants you’ll often find that these eggs have also been laid very close to the top of the compost, near where any new growth is about to emerge.

Remove any eggs you do find by using a small stick or an old toothbrush to scrape them away. Exposed to daylight, they’ll fail to hatch. Then kill any slugs you find hiding in the compost or the base of the pot by using a sharp scissors to slice them in half and leaving them for the birds to eat.