Bring back butterflies . . . and other lesser-spotted garden creatures

The variety of plants and animals in the world has fallen to dangerously low levels, but gardeners can take modest measures to encourage biodiversity 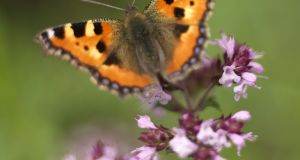 A tortoiseshell butterfly in an Irish garden feeding from the magenta flowers of oregano. Photograph: Richard Johnston 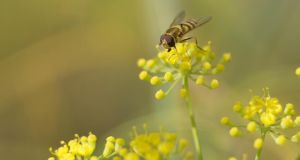 A hoverfly in an Irish garden feeding from the umbelliferous flowers of dill. Photograph: Richard Johnston 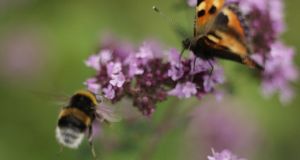 A tortoiseshell butterfly and a bee on oregano flowers. Photograph: Richard Johnston 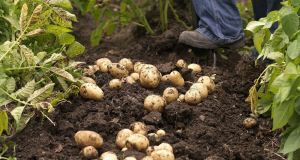 Seen many butterflies recently? No? What about ladybirds, wild bees, dragonflies, frogs or hedgehogs? Nope? Me neither. The sad truth is that the absence of these once-common creatures from many Irish gardens is our biodiversity loss made real and personal, a loss highlighted by an international study published in Science magazine recently.

Following analysis of 2.38 million records for 39,123 species at 18,659 sites, it concluded that the variety of plant and animal life in the world has fallen to such dangerously low levels that it now threatens the ability of ecosystems to support human societies.

Gloom-inducing stuff, but there’s a lot that we can do to help to reverse such losses, simply by tending our gardens in ways that are friendly to the planet and allowing parts of them to go just that little bit “wild” so that they provide a rich variety of ecosystems.

A small but significant example is the decline in the number of wild bee species in this country. They play a crucial role as pollinators, but one-third of them are threatened with extinction.

Other valuable pollinating insects – for example hoverflies – perform a secondary beneficial role in our gardens as the natural predators of aphids. And yet we continue to use a plethora of readily available garden sprays containing neonicotinoids such as Thiacloprid and Acetamiprid that are terribly harmful to them.

Not all insecticides come as sprays. Some seeds are pre-treated or coated with neonics as a way of protecting them from insect attack. That might sound quite commonsensical, until you discover that those same chemicals remain in the plant (including its nectar and pollen) long after the seed has germinated, from where they slowly but surely find their way into the wider environment.

So always examine carefully the small print on any packet of seeds before purchasing it and try to buy organically produced seeds, where possible. Suppliers include Cork-based Brown Envelope Seeds, Irish Seed Savers in Co Clare, north Dublin-based The Herb Garden, and Green Vegetable Seeds in Co Sligo, while Mayo-based supplier Seedaholic sells a small range of organic flower seed.

For a more comprehensive list of organic suppliers, see organictrust.ie

As for that worrying decline in hedgehogs, a species considered an indicator for the general health of the environment, once again much of this is down to habitat loss or fragmentation.

Hedgehogs, as you would imagine, get their name from the fact that they like to live in hedges. So the ongoing destruction of these wildlife corridors has contributed hugely to their dramatic decline.

By planting or preserving a biodiverse hedge, rich in a variety of species, you can encourage them to live in your garden.

Another key reason for their dwindling numbers is some gardeners’ continued use of poisonous slug pellets containing metaldehyde.

The inconvenient truth is that this powerful pesticide isn’t just poisonous to slugs and snails – and pets – but also to lots of other creatures including hedgehogs, frogs and birds, all three of which are natural predators of? Yes; slugs and snails. In other words, Irish gardeners’ continued use of metaldehyde-based slug pellets ends up poisoning the very creatures that would otherwise do a huge amount to control those pests naturally.

A much more planet-friendly alternative is to go slug-hunting of an evening, and using secateurs or sharp scissors to chop them in half, and leave them for the birds to enjoy. If the thought of that turns your stomach, use small amounts of organically approved brands of slug bait containing iron phosphate, or other organically-approved control methods such as beer traps or nematodes (see nemaslug.co.uk).

But bear in mind that not all slugs are terribly damaging to garden plants. Often it’s the biggest ones – for instance the black slug, Arion ater – that do the least harm.

As for weedkillers, avoid using them for lots of reasons, including that worrying lack of butterflies. While climate change and urban sprawl has played an important role in the decline of these beautiful insects, so too has our fondness for using herbicides such as Roundup to keep our gardens “tidy” and our lawns weed-free. But many common weeds, grasses and wildflowers including nettle, dock and thistle act as important host plants for the larvae of butterflies, while their flowers are an important source of nectar-rich food.

So by allowing them just a little space, we can help Ireland’s butterfly numbers to recover.

Elsewhere, control weeds by a variety of environmentally-friendly methods, including hoeing, spot weeding, mulching and weed-suppressant fabrics, as well as flame-weeders (see fruithillfarm.ie).

Avoiding herbicides will also keep your garden’s soil in good heart and boost its population of earthworms, another important food source for a variety of  garden wildlife. So will top-dressing the soil with homemade compost or manure.

Nature will always find its own balance. We just need to trust it to do so.

One of the best plants for providing plenty of nectar-rich flowers for butterflies is Buddleja, commonly known as the butterfly bush, a hardy, deciduous, woody shrub that blooms profusely from July until September. Depending on the variety, those decorative flower spikes can be dark purple  (‘Black Knight’), pink (‘Pink Delight’), white ‘White Profusion’, purple-red (‘Royal Red’), or even bi-coloured (B. x weyeriana ‘Bicolor’). While the butterfly bush is typically a large, slightly sprawling shrub, new, ultra- compact forms such as the Podaras series are suitable for the smallest gardens. It’s been a marvellous summer for raspberries, but if you’re sick of birds beating you to your homegrown crop, yet don’t want to bother with the time-consuming business of netting the plants, then consider growing a yellow-fruiting variety such as ‘All Gold’. Birds tend to avoid the yellow-fruiting kinds in favour of the more traditional, red fruits.

Many potato crops are showing obvious signs of blight (dark-brown patches surrounded by a pale “halo”, visible on wilting foliage and stems) as a result of the recent damp, muggy weather. Prevent it damaging the tubers by cutting the plant’s foliage down to the ground as soon as you spot it. Bag the infected foliage and dispose of it carefully to avoid the disease spreading to neighbouring gardens.