Forecasting the market: What's in store for property in 2015

A key cooling factor is the proposed Central Bank mortgage limit to double the deposit requirement, as buyers, sellers and builders adopt a wait-and-see approach 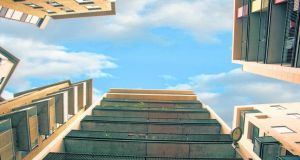 Looking ahead: The obvious release valve on price pressure will be the construction of new homes in desirable areas in 2015

The new year brings with it fresh speculation as to how the property market will perform in 2015. But if anything was learned last year, it’s that predictions in a still-recovering market are futile. Would anyone have wagered in late 2013 that prices would soar at a staggering rate in the capital (and other urban centres) in the first half of 2014, only to slow down so much in the second half that for the first time since 2012 asking prices would fall by around 1 per cent?

One of the key cooling factors is the proposed Central Bank mortgage limit, still at the consultation stage, which proposes doubling the deposit requirement for buyers from 10 per cent to 20 per cent. The intention may be to deter sellers from chasing selling prices back up to previous levels, and borrowers from over-extending themselves on credit, but the immediate impact has been a market stand-off as buyers, sellers and builders adopt a wait-and-see approach.

There’s a consensus among industry stakeholders that growth will not continue in 2015 at the same rates we have seen. According to John McCartney, director of research with Savills: “The market is now two years into its recovery, so sustaining last year’s spectacular growth rates was never going to be likely. There has also been a big shift from cash buyers (investors and owner-occupiers with ‘mattress money’) back to traditional mortgage-financed buyers. Because of existing and potential bank lending constraints, the mortgaged buyers are much more price sensitive.”

With transaction levels up to more than 40,000 in 2014 compared with just under 30,000 in 2013, Angela Keegan managing director of property website myhome.ie expects this trend to encourage more trader uppers to enter the market, but, she believes, continued uncertainty around the Central Bank decision on deposit rates will almost definitely lead to a decrease in the number of first-time and cash buyers.

The limited stock of properties to buy also remains a serious stumbling block in restoring normal market activity. Demand outstripping supply in many urban areas is a key contributor to rising prices, and the effect is rendering homes unaffordable for buyers who want to trade up. 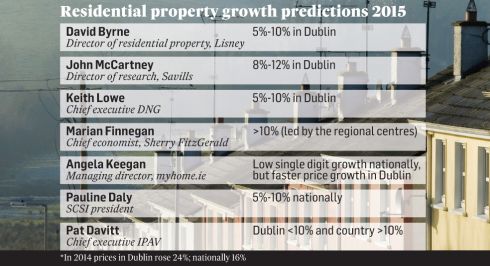 On the plus side, David Byrne, director of residential with Lisney, says: “Rising house prices have reduced negative equity for many and this combined with greater availability of financial products (which allow buyers to move their tracker mortgages), will entice more homeowners to consider a move.” Good news then. But Keith Lowe, chief executive of DNG, warns that sellers are encountering problems of their own: “As there is no bridging finance in the market, some sellers are nervous to take the plunge, as they essentially have to sell first before they can buy and that uncertainty can be off-putting.”

At a national level the impact of the total collapse in capital values to between 40-45 per cent below the 2006 high has left many potential sellers still in negative equity, according to Marian Finnegan, chief economist with Sherry FitzGerald. “The golden handcuff of favourable tracker mortgages may also act as a barrier to entry for many sellers.”

The Society of Chartered Surveyors Ireland is anticipating an increase in supply in the second-hand market as banks work through their distressed residential loan portfolios (though indicators suggest this may not take place until the latter part of the year). It’s also worth remembering, these are likely to be buy-to-let properties with tenants already in situ that will appeal primarily to an investor market. This doesn’t really solve the problem for owner- occupiers.

McCartney says the opportunities for smaller local investors are limited because of compressing yields and the withdrawal of the Capital Gains Tax incentive at the end of 2014. Lowe agrees: “There is little meaningful funding available for investors who wish to purchase buy-to-let properties. This is an important element of any market and until mortgages are easily available for the investment sector as well as home loans the market will not return to normality.”

Pat Davitt of the Institute of Professional Auctioneers and Valuers (IPAV) is calling for a continuation of the Capital Gains Tax incentive for certain areas of the country in order to keep investors in the market, and a continuing supply of rental properties over time. But this is unlikely to address the challenge of providing rental accommodation where it’s most needed.

McCartney says the private rented sector will continue to shrink in 2015. Continued price growth will incentivise “disillusioned boom-time landlords to offload their investment properties”. A potential upside he anticipates might be a more professionalised private rented sector. “As the amateur boom-time landlords retreat, we will be left with a residual of professional investors – both individuals and institutions. This should lead to better overall service standards.”

Finnegan says that any depletion in the quantity of buy-to-let property will fuel rental inflation. “This will be augmented if potential first-time buyers are displaced into staying in rental accommodation for longer by a need to save a larger deposit.”

The pressure-cooker situation building in the capital around rising rentals and a limited supply of houses is likely to push buyers out to the regions, and 2015 may be the year when the commuter-belt counties of Kildare, Meath and Wicklow see real growth. Lowe envisages areas of Dublin that have recovered more slowly than others, such as west and north Dublin, will see stronger growth as a result of price inflation in more prime areas.

The obvious release valve on price pressure will be the construction of new homes in desirable areas. Construction is the fastest growing sector of the economy, but it’s not fast enough yet to satisfy the needs of first-time buyers. With just 8,700 new homes built in 2014 the National Housing Agency says that an average of 16,000 new homes will be required each year for the next four years.

Pauline Daly, president of the SCSI, says: “A substantial increase in the number of shovel-ready sites is required to cater for this demand. We see a need to streamline the planning process and reduce the VAT rate on new home construction on a temporary basis.”

The call for reduced VAT on new homes is echoed by most within the industry, with building costs cited as a major concern. Davitt is also calling for a closer examination of new building regulations, especially in the city, and the reduction of building planning levies to make new homes construction more viable in certain areas. The rezoning of land banks by authorities to accommodate appropriate well-serviced family accommodation – away from high-density apartment schemes – where it is needed, would be welcomed.

Tom Parlon, director general of the Construction Industry Federation, says build projects have been put on hold at the moment pending the outcome of the Central Bank decision on mortgage policy. Access to finance is already a major issue for builders, with banks only providing a maximum of 60 per cent equity for a construction project.

“This means that the house-builders have to find the remaining funding through other channels. Few have access to any reserves. So the only option available to many is to go through the vulture funds who are charging prohibitive rates.”

Based on recent experience, of course, it’s an unsavoury prospect that the State might intervene to give the property industry any kind of a “leg up”.

The last thing that’s needed is incentivised building schemes in the middle of nowhere, but a joined-up approach to ensuring current and future housing demands might well trump across the board mortgage ceilings that are likely to favour the better off who can pull together 20 per cent cash deposits.