Timber is the new concrete. It's time to get over our fear of building with it

Europe’s urban areas are giving timber a new place to hang out. Many urban detached homes are now being built from prefabricated cross-laminated timber 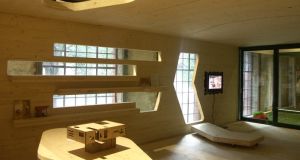 The Naked House: it was transported to site in a container and erected in 24 hours

Growing up we had the quintessential Aussie shack. Dad built it from the ground up with planks from a nearby mill. Inside it was lined with cut-price OSB (orientated strand board) – two decades before it became trendy – with endless quirky shapes from which to conjure creatures. Interior cloud-gazing at its best.

Later I lived in a wooden cabin in Norway, with large picture windows and a tiny footprint. When we bought it, it had stood empty for 20 years. I’ll never forget sliding the key into the rusted lock, jiggling the door open and being met with a resinous smell redolent of trekking through a pine-forest on a warm autumnal evening.

When I walk around Dublin I look for timber houses. Where are they? Hiding beneath concrete? Disguised as potting sheds? Booed out of the urban environment for being too provincial?

In Ireland we are just a little bit scared of timber in our homes. Golden log cabins are dotted ever-so-sparingly across the countryside; tiny squares of cedar creep apologetically into our cityscapes; timber-framed houses are quickly covered up with render to conform to the norm.

We have thrown timber to the wind. And yet in this material lies a quick and economically competitive construction alternative to our blockwork and plaster world.

Northern Europeans are quick to extol the virtues of a well-built timber home; they’re healthy to live in, they’re easy to construct, they feel cosy. Where would 2017’s most irritating word, “hygge”, be without a warm-pine wall in the background? But hygge is cabins and lakes, it’s rural and forest-bound.

But now Europe’s urban areas are giving timber a new place to hang out. Across the continent, hundreds of detached homes, apartment blocks and high-rises are being built out of cross-laminated timber (CLT).

CLT is plywood on steroids – built up layers of planks, each strata at right angles to the last, providing individual panels with exceptional dimensional stability. Widely used in Switzerland, Scandinavia and Germany, it’s rapidly earning respect for its high strength-to-weight ratio and durability. It’s a self-supporting construction material, forming both the structure and the skin of a building.

“It is the new concrete,” says Prof Alex de Rijke, co-founder and director at London-based architectural firm dRMM. “Engineered timber is the material of the 21st century.”

And this is a man who should know. dRMM won the 2017 Stirling Prize for its part-CLT regeneration of Hasting Pier on England’s southern coast. The firm has been using CLT since the turn of the century, working hard to bridge the gaps in knowledge about the material in the UK market. In 2006 it built its first flatpack building: Naked House. It was transported to site in a container and erected in 24 hours.

“Since the fire of London we have forgotten how to use timber,” says de Rijke.

It’s true the 1666 blaze hasn’t helped timber advocacy over the past three and a half centuries. “People worry about fire, but with CLT the well-documented char layer creates a protective barrier.”

In 2013, dRMM collaborated on the first all-timber home to be built in central London since the fire. WoodBlock House, nestled between brick and concrete, features a south-facing living area with an open-plan design reminiscent of that Irish icon – the Dermot Bannon extension. But with carbon credentials.

“CLT is a carbon sequester,” says de Rijke. While a tonne of cement emits its equal weight in carbon, the process of growing a tonne of timber will remove up to two tonnes of carbon from the atmosphere.

“One of the most obvious reasons to start using timber rather than concrete is that it’s commonly grown, and therefore an exceptionally renewable building material that we have available to us,” says de Rijke.

This is a fact that should pique the interest of Ireland’s burgeoning bioeconomy. With Coillte planning to double production and Brexit looming ominously over the near-term timber trade with the UK, we may need an internal market for this ever-growing resource. Or even look to provide the expanding European demand.

In 2003, just 2,000 cubed metres of CLT were produced globally. In 2018 that figure will top 1 million. Increased production will mean decreased costs; a much welcome boost for a growing industry.

The downside, of course, and De Rijke admits it, is that currently the raw material cost of CLT buildings is generally higher than that of traditional blockwork equivalents.

“However, what we do is so much quicker. It requires less people and significantly fewer processes. Huge savings can be made over standard building projects. That way it’s possible to get prices down to something comparable.”

Precision engineering and pre-fabrication means that a structure built from CLT can often be completed in less than half the time of a traditional build. Rigorous engineering also makes for trouble-free air-tightness testing. There’s no need for scaffolding and everything is quality controlled on-site.

“Distribution, transport and storage; they’re all quicker and easier,” say de Rijke, highlighting that a CLT build will require one fifth of the deliveries of a traditional build.

“There’s a low skill requirement, everything is put together with hand tools,” says de Rijke. This makes the process quieter, calmer and relatively dust-free. “Contractors are happy, neighbours are happy.”

And, casually, he drops the W-bomb. “Of course, with traditional construction the timeline often becomes wishful thinking because the real Achilles’ heel is the weather. With CLT buildings, even if it’s pouring rain a roof can be rapidly installed.”

As I look out the window at the endless spring downpour, I wonder what we’re waiting for. A building material that is sustainable and durable, quick to erect, quiet to work with, and could, one day, ensure the future of Ireland’s bioeconomy. Surely there’s something in this timber revolution that we can learn from?

Want to avoid the wonky first pancake? Here’s how ...
5

My days of eating meat at every meal are over
8