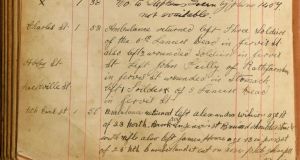 Collectors of Irish historical memorabilia were out in force – in person and online – at Whyte’s auction last Saturday, where 84 per cent of the 500 lots sold realising €230,000. Some 20 per cent of lots were bought by internet bidders who had registered from various locations in Ireland and overseas including the US, the UK, France, Belgium, Australia, Canada, South Africa, Italy, Israel, Germany and Qatar.

Auctioneer Ian Whyte said there were “many new collectors at the sale – particularly young collectors – which reflects the great interest in Irish history generated by the decade of centenaries”. Although he could not disclose the identity of buyers, Whyte was pleased that “the institutions – the National Museum and National Library among them – were able to acquire what they needed for public collections without invoking the wrath of our EU masters”.

One of the most notable items was a log kept by the Dublin Fire Brigade’s ambulance service during the Easter Rising in 1916. It recorded the first fatalities and injuries – both military and civilian – and sold for €3,800 (€3,000-€5,000) to an unnamed Irish “institutional archive”.

Two uniforms which belonged to General Sir John Maxwell, the British Army leader who suppressed the Rising, sold as a single lot for €6,600, well below the estimate of €15,000-€20,000.

The top lot in the sale, an Irish tricolour reputedly flown over Dublin during the Rising and painted with the slogan “Sinn Féin go deo” (Sinn Féin forever), had an estimate of €30,000-€50,000, but failed to sell.

A very different flag, a large-fringed tricolour embroidered with the words “Garda Siochana. Presented to the Hon Robert E Enright, Commissioner of Police, New York City, from the Irish Police as a Token of Esteem. International Police Conference 1925’’ sold for €1,700 (€1,500-€2,000).

Two previously unpublished letters, dated 1918 and written by Countess Markievicz deploring all things English, including the introduction of Greenwich Mean Time in Ireland, made €1,900 (€2,000-€3,000).

A photograph of women workers in a first World War munitions factory – the National Shell Factory on Dublin’s Parkgate Street – sold for €220 (€150-€200).

A signed photograph of Michael Collins in a Free State army uniform made €900 (€300-€500). However a souvenir programme signed in pencil on the cover by Michael Collins (in Irish as “Micheál Ó Coileáin”) and a ticket for a 1921 concert in his honour at London’s Royal Albert Hall, estimated at €5,000-€7,000, failed to sell.

How to pan fry the perfect chicken breast
7

Jimmy Gralton, the only Irishman ever deported from Ireland
8

Paul Flynn: ‘I still have all my old menus. One dish stands out: bang bang chicken’
10