‘Buy what you like, as you have to live with it’ 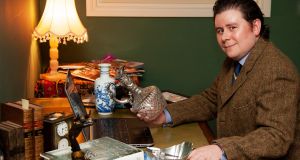 George Gerard Mealy: ‘My father will regularly spin more than 100 lots in an hour, and up to 800 lots in a day. I would be lucky to get through the lots at half that pace.’ 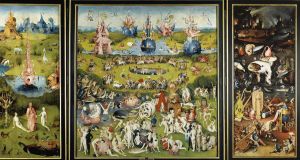 Spectacular, disturbing: ‘The Garden of Earthly Delights’ by Hieronymus Bosch, in the Museo Del Prado, Madrid, is Mealy’s favourite painting

I’m the third generation to work in the family auctioneering business. Mealy’s Fine Art, based in Castlecomer, Co Kilkenny, holds four main auctions of fine and decorative art and antiques a year. We also hold on-site country house auctions and offer valuations and a private sales service. Our saleroom is in a new, purpose-built building at Kilkenny Road, on the outskirts of Castlecomer.

What do you do?

Although I’ve been a licensed auctioneer since 2007, most of the work I do is behind the scenes and includes tendering and pitching for potential sales, accounts management, client relations and research.

I rarely take the stand on the rostrum at Mealy’s, mostly due to the speed and accuracy of my father’s gavel work, with which I find very hard to compete. [George Mealy Snr] has more than 40 years’ experience and will regularly spin more than 100 lots in an hour, and up to 800 lots in a day. I would be lucky to get through the lots at half that pace.

Recently I’ve been developing our private sales department – arranging the sale of art and antiques by private treaty rather than by auction – which is a growing part of our business.

I grew up in Castlecomer, Co Kilkenny, and went to school in Kilkenny College and St Gerard’s School in Bray, Co Wicklow.

After my Leaving Certificate, I studied in the UK and graduated from Southampton Solent University with a diploma in fine art valuation.

I returned to Dublin to pursue a bachelor’s degree in Business and Law in UCD and as part of the international programme, I spent a year in Toronto – at Osgoode Hall Law School – where I met my wife, Rhonda Rana.

We got married in 2010. After university, I trained at PwC in advisory services before beginning my training at Mealy’s at the end of 2007 – just at the beginning of the financial crisis. In the early years of the recession, I passed the New York bar exams and was admitted to the New York State Bar in 2012.

I’m finishing my masters degree in international relations at DCU this year and my thesis is on the international law of cultural property and heritage, a subject I find absolutely fascinating.

Working on the auction of the contents of Mount Congreve in Co Waterford that Mealy’s conducted in association with Christie’s in 2012. The house was the ancestral home of Ambrose Congreve, a well-known collector, and the contents of two sales (one in London and one in Waterford) yielded more than €6 million.

It was an honour and a privilege to be involved with such a wonderful collection and to work closely with the team at Christie’s, from whom I learned so much.

Buy art and antiques firstly for their aesthetic appeal, and secondly as a hedge or store of value. Acquiring such assets as an investment, purely motivated by profit, is not a very wise strategy as they rarely, if ever, provide an income stream, can often fluctuate significantly in value due to changes in the market condition, and are subject to significant transaction costs, often in excess of 20 per cent on both the buying and selling sides of the transaction. I would advise the old adage that I learned from my father – “Buy what you like, as you have to live with it” – and appreciate your purchases primarily for their artistic and decorative value. Of course that is not to say that one cannot “buy low and sell high” in the art and antiques market, but this should not be your priority. There are more suitable markets for pure investment purposes.

What do you personally collect, and why?

I’m not a big collector and must admit that I prefer minimalist surroundings in my own home.

We live in an apartment in Kilkenny, and so space is always an issue. I do, however, have a passion for rare books and have in recent years started buying quality bindings and early signed editions of my favourite books.

I also like attractive pieces of antique furniture of small proportions that are both functional and decorative. Something I’d like to have bought wasn’t for sale: it’s in a museum. An obscure little ancient stone carving, entitled Head of a bearded man, About 530-500 BC in Oxford’s Ashmolean Museum is the work of art that brought me the most joy. My wife and I stumbled upon it during a guided tour while attending an art auctioneers’ conference. The figure depicts the most self-satisfied man I have ever seen. His cheeky grin is etched in my mind.

I’d consider purchasing the contents of Irish country houses – such as Westport House, Bantry House, and others that are currently under threat – and donating them to the State to preserve these wonderful collections in situ for the Irish people and our descendants. I have been surprised by the small numbers of “white knight” philanthropists willing to intervene in these matters to ensure such collections stay in Ireland, especially in light of the affiliated tax incentives, and I applaud those who have.

What’s your favourite work of art and why?

What sold for €320k in Inchicore, Crumlin, Phibsborough and Terenure
4

A cardiac problem that could strike at any time
7

Has your sense of smell changed recently?
9