Mountbatten heirlooms offer insight into glamour of a dazzling dynasty 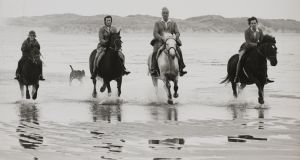 Lord and Lady Mountbatten with daughters Pamela and Patricia ride along the beach at Classiebawn. Photograph © The University of Southampton Library

The family collection of the late Patricia Knatchbull, of Newhouse in Kent, who died in 2017, will be auctioned by Sotheby’s on March 24th in London.

As the 2nd Countess Mountbatten of Burma, great-great-granddaughter of Queen Victoria, great-niece of Russia’s last Tsarina, first cousin to Prince Philip and the daughter of Britain’s last Viceroy of India, Knatchbull was born into a dazzling dynasty of royal and political relations.

The eldest daughter of Louis Mountbatten and glamorous heiress Edwina Ashley, Knatchbull had a rather unconventional upbringing. Her sister Pamela recounted in an interview with Vanity Fair how their mother had endless affairs, and one of her lovers “more or less moved in with the family”. Her father enjoyed a decades-long relationship with Yola Letellier, a gamine Frenchwoman, upon whom Colette based her 1944 novella Gigi. Her mother was said to have regarded her daughter as “an ornament with whom she was occasionally photographed” and she was raised by a series of nannies.

Weekend parties with King Edward VIII and Wallis Simpson at her parents’ estate in Hampshire, and evacuation on the eve of the Blitz to stay with Mrs Cornelius Vanderbilt III in her palatial Fifth Avenue apartment in New York, were all part of her exotic life. In 1946, she married John Knatchbull, 7th Lord Brabourne, who later became an Academy Award-nominated film producer for his films A Passage to India, Death on the Nile and Murder on the Orient Express.

Described as the “the personification of the stiff upper lip” by sister Pamela, and who Queen Elizabeth reportedly described as “fierce”, she was colonel-in-chief of Princess Patricia’s Canadian Light Infantry for 33 years, until she retired in 2004, saying: “When I turned 80, I said, for goodness sake, I can’t drive a tank any longer.”

Though her life was one of extreme privilege – when she married, Princess Margaret and Queen Elizabeth were among the bridesmaids, and her daughter Amanda declined a marriage proposal from Prince Charles – it was also marked by tragedy.

In 1979, her world was upended when a bomb planted by the IRA on Lord Mountbatten’s fishing boat, Shadow V, near his home of Classiebawn Castle in Sligo, killed her father, her 14-year-old son Nicholas, her mother-in-law and local boy Paul Maxwell. She, along with her husband and son Timothy, were badly injured. She required 120 stitches to her face including her eyeballs, and was unable to cry, but it is said that once the stitches were removed, she wept every day for a year. Over the course of her life she was patron of over 100 charities, with a particular interest in healthcare, and children’s and bereavement charities, and was appointed CBE in 1991.

When she married John Knatchbull and inherited her father’s peerages, the pair became one of the very few married couples in England each of whom held a peerage in his or her own right, and became the custodians of two great inheritances.

John’s included Mersham le Hatch, an elegant house by Robert Adam in the Kent countryside, where the Knatchbull family had settled in the 15th century. Furnished by the great Thomas Chippendale in the 1770s, the house held within it objects with extraordinarily diverse provenances, including some from explorer and botanist Sir Joseph Banks, who travelled to Australia on Captain Cook’s first expedition.

The countess inherited precious objects associated with her parents from their glamorous art deco penthouse on Park Lane including those of her great-grandfather, the Edwardian financier Sir Ernest Cassel.

The sale, on March 24th, will be preceded by a public exhibition which will offer an insight into the ultra-glamorous world of these two legendary aristocratic families. Consisting of 350 lots, heirlooms range from €90 to €114,000, the highlights of which include lots connected to the Russian royal family such as a silver and enamel Fabergé timepiece that Knatchbull used as her bedroom clock (£15,000-£25,000/€17,000-€28,500).

The Banks Diamond, an 18th-century brooch with a cushion-shaped yellow diamond, which belonged to scientist and explorer Sir Joseph Banks, features along with “tutti frutti” style gems with carved rubies, emeralds and sapphires showcasing her mother Edwina’s penchant for art deco (£40,000-£60,000/€45,590-€68,390).