Masterpiece by Paul Henry appears at auction for the first time 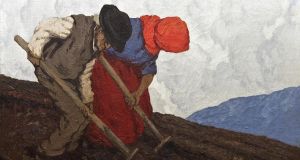 ‘I have yet to see people who worked so hard for so little gain. It meant incessant toil with the spade” was how the painter Paul Henry described his first impressions of small farmers on Achill Island in 1910. His oil-on-canvas The Potato Diggers , depicting Michael and Margaret Toolis working in the harsh landscape, will go under the hammer at Adam’s in Dublin on Wednesday.

Auctioneer James O’Halloran described it as “a masterpiece and the best Henry that has ever come to market”. The estimate is €250,000-€350,000 and the vendor is an Irish family who acquired it directly from the artist in the 1930s for around £300. The painting was last seen in public 20 years ago when it was loaned to an exhibition in Dublin.

Other highlights include a further three smaller paintings by Paul Henry; rural scenes by Frank McKelvey; and a selection of watercolours by Mildred Anne Butler, mainly featuring creatures great and small in the grounds of her Kilmurry House and, perhaps most interestingly, her sketchbook containing seven small watercolours (€2,000-€4,000).

A sculpture section includes a bronze Bust of Donagh O’Malley by Irene Broe, with an estimate of €800-€1,200.


More Henrys at Whyte’s
Whyte’s art auction on Monday also features Paul Henry whose pencil drawing A Connemara Woman is estimated at €3,000-€5,000 and an early oil, Connemara Landscape , is €8,000-€10,000. Auctioneer Ian Whyte said there was increasing interest from collectors for traditional, representational art and that “worthy contenders in this genre” include Frank McKelvey’s Gypsy Caravan (€10,000-€12,000) and Fair Day Scene (€12,000-€14,000).

Viewing from today at the RDS, Anglesea Road . Videos describing some of the key lots are on whytes.ie. Auction begins at 6pm on Monday.

Older people on isolation: ‘I have plenty of food but not much appetite’
3

Gardening for beginners: How to sow and grow for the first time
10